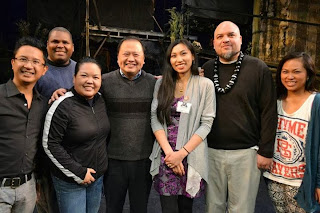 For the Sunday, January 20th show of Kung Fu Zombies vs. Cannibals, MN State Senator Foung Hawj was in attendance. Senator Hawj has been a long-time supporter of the arts, and was interested in the way playwright Saymoukda Vongsay addressed the issues of UXO and the Secret War throughout the play.

There has often been an interesting relationship between the arts and civic engagement for the Hmong and Lao community. While it has not necessarily been the same for other refugee communities, almost all of our elected officials from the Hmong and Lao backgrounds have been connected to the arts for at least some point in their young professional careers. I would argue that any institution that wants to see greater civic engagement from Hmong and Lao would do well to sponsor positive and meaningful arts programs. Not just half-hearted after-school busywork.

One reason I suspect this has been the case for our communities is that performing arts such as poetry, spoken word, and theater encourage Lao and Hmong to build audiences. To understand timing and logistics. To build not only language skills, but non-verbal and environmental communication skills. They learn to become advocates for themselves, and in the process of researching for their own art, they become in tune with their audiences and their communities. They also learn how to work their hustle and how to be life-long learners. These are essential skills.

I would turn to Senator Hawj's biography as a great point to understand his journey, which resonates with many of us:


"When I left my home country of Laos over three decades ago for a new life in America, I could never have imagined that I could one day be elected to public office. I work hard all my life, got a college degree and started my professional career as a computer programmer and later was able to start my own multimedia production company. I became interested in public service through my years of volunteering, working with different kinds of groups to improve my surrounding including the East Side of St. Paul. As I told my senate colleagues, "I'm new to politics, but I'm not new to helping people." Moving from a war-torn Laos to urban America, I have been through much adversity and overcame many obstacles. This has given me a lot of appreciation for the struggles people go through, but also a boundless optimism about what is possible when we work together..."