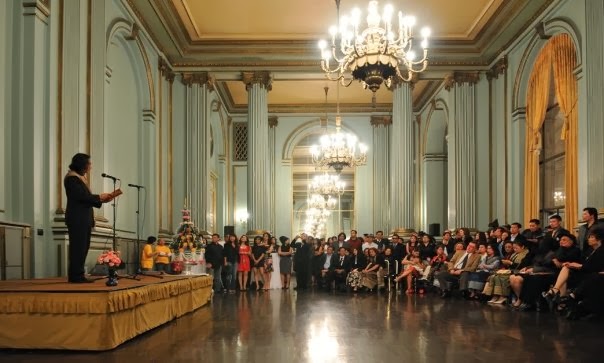 The list is notable in that the first draft does not include Lao American poets. However, with the approach of the Lao New Year this April, and as Laos celebrates its 60th year since being recognized by the United Nations it seems appropriate to mention a few of the active Lao American poets who could have been included in such a list.

Naturally, I would suggest the award-winning poet Saymoukda Vongsay, who received the Carey Prize in Spoken Word and is the author No Regrets, although many may be more familiar with her plays such as Yellow Tail Sashimi, and of course Kung Fu Zombies vs. Cannibals.

Catzie Vilayphonh is half of the spoken word duo Yellow Rage, which was the first Asian American act to perform on HBO's Russell Simmons Def Poetry Jam. She is currently organizing the Laos In The House project to bring Lao artists and writers to Philadelphia in 2015 in time for the 40th anniversary of the Lao diaspora.

Phayvanh Leukhamhan is a Vermont-based poet who participated in the Kundiman Retreat for Asian American poets and who worked with Souphine Phathsoungneun to create the poetic opera “I Think of This Every Time I Think of Mountains," although I consider it a little hard to find copies of the whole thing.

Sery Bounphasaysonh is an emerging writer whose work I enjoy, and featured his poetry at the Journal of Southeast Asian American Education and Advancement in 2012, along with the poetry of Krysada Panusith Phounsiri and Jim Vongsouvanh.

I'd certainly watch all of their work for a sense of where Lao American poetry is headed.

The SatJaDham Lao Literary Project was founded in 1995, and as it approaches its 20th birthday, I think it's important to remember the many different poets whose work was featured in their anthologies. For some, it represented the whole of their published work to date, but for others like Kongkeo Saycocie, they have continued to share their work widely online as the Lao rebuild in the aftermath of our many conflicts.

There are many Lao American poets who we could name, but in the interests of time and space, we'll keep this list brief for now. I am hopeful that in the next few weeks we'll get some good news about the 2nd National Lao American Writers Summit among other projects.