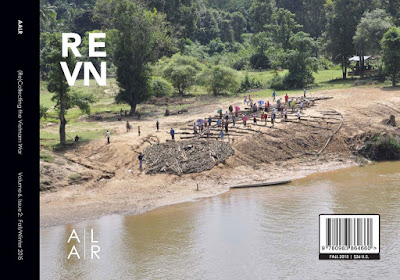 A while back I mentioned that several examples of my work would be appearing in the Asian American Literary Review's issue, (Re)Collecting the Vietnam War, Volume 6, Issue 2: Fall 2015. The issue's Guest Editors are Cathy J. Schlund-Vials and Sylvia Shin Huey Chong. They recently announced the table of contents of contributors.

In addition to my work, there will be writing from many other great talents including Soul Vang, Anida Yoeu Ali, Sayon Syprasoeuth, Saymoukday Duangphouxay Vongsay, Khosal Khiev, Mai Der Vang, Kao Kalia Yang, Ocean Vuoung, Cathy Linh Che, Jai Arun Ravine, and Bao Phi, among many others. Overall, this promises to be an exceptional and timely issue for the 40th anniversary since the end of the conflicts in Southeast Asia.

The Asian American Literary Review is a space for writers who consider the designation “Asian American” a fruitful starting point for artistic vision and community. In showcasing the work of established and emerging writers, the journal aims to incubate dialogues and, just as importantly, open those dialogues to regional, national, and international audiences of all constituencies. They select work that is, as Marianne Moore once put it, “an expression of our needs…[and] feeling, modified by the writer’s moral and technical insights.”