[Laomagination] Considering the Lao Living Dead, Rhinoceri, Strippers and the End of the World

Some great concept art came in this week for a set of Phi Dip, often translated as "The Raw Ones," who are largely analogous to zombies or ghouls. As noted in other entries on this blog, in the Lao tradition, the corporeal undead embody an uncommon concept, as the majority of dead are cremated. Personally, I enjoy the term Phi Zom, but we'll see which term wins out over time.

In recent years, Lao American horrorists have typically used the Phi Dip to expore the 5 Buddhist precepts regarding prohibitions not to kill, lie, steal, drink or do drugs, or to have immoral sex. There are certainly many other directions this could go.

What will become the common Lao visual and textual vocabulary for the undead? At the moment, we can look at productions of Saymoukda Vongsay's plays or the writing of Sam Sisavath for some hints of what our sensibilities will ultimately prefer.

The zombie motif holds particular interest for us considering how much the focal point of fear regarding zombies and ghouls changed in the 20th century in mainstream culture.

Originally, the fear was centered on the idea of the self becoming a mindless slave to the zombie master. I find the fear of losing one's free will and self-determination deeply compelling, and intriguing as a notion of a gross, repellent indignity that went against our sensibilities, especially in the US.

Our fear later shifted to being eaten by the zombie, then being part of the horde eating your loved ones or worse. In some cases, the fear came from the possibility of just doing nothing, even in your afterlife, except going to the mall or else being retained as unpaid drones for dead-end jobs. 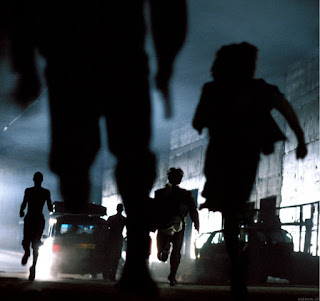 In the 21st century, The Walking Dead, 28 Days Later and others strongly suggest the root of horror will be that humans can get used to the zombies, but it's the other living humans who will be the most problematic for survivors. "Hell is other people," as Sartre might suggest.

Or, you might find yourself in the existential crisis similar to Zombie Strippers, a 2008 take on Ionesco's classic play Rhinoceros that featured Jenna Jameson and Robert Englund.


For Lao Americans, it will be interesting to see what we consider the most terrifying aspects of zombies over time as we start telling our own tales.

I find myself intrigued by how a Lao approach to Ionesco's themes might work, because Ionesco was addressing fascism, naziism and how humans might well be seduced into a herd mentality when they're in a society of empty bourgeois, middle class life. "Comfortable" but shallow, filled with weightless duties. You have things to do, but they're really of no consequence.

In Rhinoceros, people keep turning into bestial rhinoceri for no apparent reason, and as the play progresses they become more awesome in their primal, destructive beauty. In contrast, the protagonists become more crude and ugly in relationship to the changing world around them. They don't fit into the new order of things. Yet, if one awakens in the world, and has a sense of responsibility, however flawed and skewed, Ionesco's protagonists discover what he suggests is true beauty: The possession of a moral strength one has CHOSEN to embrace.

Seen through a Lao lens that's particular to our culture's recent history, I can see this as a conversation we will need to have through our art a few times. 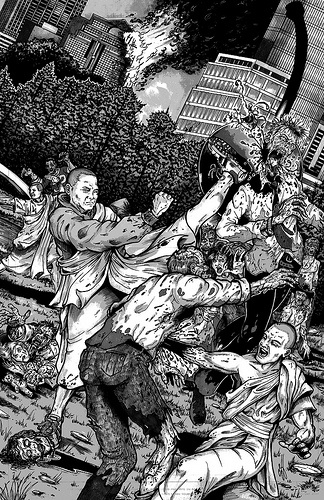 I suspect many of us will be more drawn to the idea of Lao becoming Phi Dip as a karmic come-uppance for abusing their humanity in this lifetime. That among the first to become victims will be those who embraced a variety of vices, hypocrisy and exploitation of fellow Lao and others for their own personal gain and self-gratification.

These days, we might well approach it with a certain schadenfreude, similar to Dante's Inferno, where we see the scales of justice rebalanced with a grand guignol flair. How disappointed many of us would be if we were to bear witness to the end of the world, but those chiefly responsible for that end didn't get theirs before the rest of us. 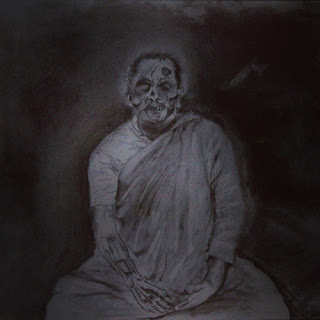 As a horror writer, I always want us to push the metaphors further, and to consider what are the absolute worst possibilities. In conversations, I find we tend to consider the most tragic, transgressive cases those who are innocent or righteous becoming victims of the Phi Dip, such as children, elders and monks.

Everyone else is largely seen as fair game and perhaps there's a certain rectitude, a resolve and acceptance for losses in the community that stems from a sense that in another lifetime, karma will right itself. Those who fell unfairly will return in positions of power or comfort. Those who threw others under the bus will be dealt with appropriately.

To progress further to our fullest potential, the Lao imagination must be stretched and take risks to confront our values and pin them against the proverbial wall. I suspect in most situations since the war, we've found they're not absolute. Many outside of our culture consistently suggest we are averse to open conflict and disagreement. Would it go so far as appeasement and opportunism in the worst historical senses of those words? I think that's a definite elephant in the room.

We might ask ourselves when we've become too sabai, or accept too much with a sense of thammada. Is this an offshoot of Buddhist principles that dislike attachment? The beloved jataka story of the Buddha's previous life as Prince Vet is interpreted as an admonition against excessive generosity and non-attachment. There are points where our emotional and spiritual engagement are necessary and healthy. How will we express this through an interesting narrative? 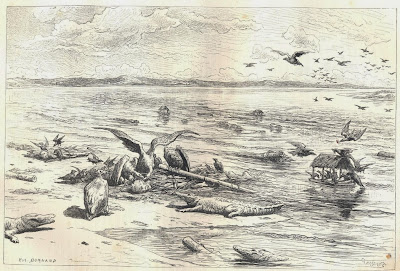 These exercises in creating Lao horror serve many ends. They assert the importance of diverse perspectives in arts and letters. This is largely uncharted territory for our culture, a blind spot that I feel deserves to be addressed.

A culture that cannot express its fears, both rational and irrational, often has a diffulty also expressing its ambitions and sharing its memories, its histories and traditions. When we let go of these deep elements of our culture, we shortchange the next generation. Our youth emerge with no sense of what we are fighting for, or what we risk losing, should we fail.

In the majority of enduring global cultures, there are things much worse than mere personal death, but at the present moment there is little in Lao literature that discusses this at length for ourselves, or for those just getting to know us.

The novelist Graham Greene had an epigraph that's lingered with me for decades, "Will you be sure to know the good side from the bad, the Captain from the enemy?" from his novella The Captain and the Enemy. As we rebuild our traditions in the Lao American Renaissance, I think this is something we need to ponder in our work.