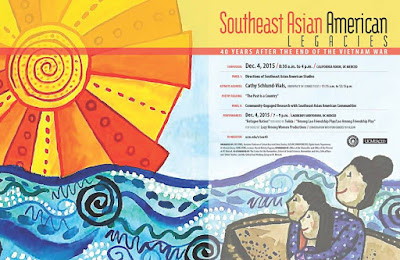 Tomorrow at the University of Merced, I'm doing my last public reading for the year as part of the "Southeast Asian American Legacies: 40 Years After the End of the Vietnam War." For the very first time, I'll be reading with Hmong writer Mai Der Vang in "The Past Is A Secret Country." It's free to the community, so please come by if you have the time. 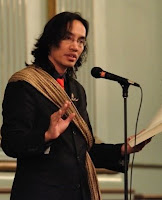 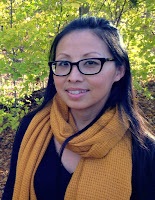 This is a remarkable and fitting finale to the year because this week in particular marks the government transition in Laos 40 years ago that changed the lives of so many around the world. This year is also the 20th anniversary of the SatJaDham Lao Literary Project and the 5th anniversary of the Convention on Cluster Munitions. Personally, as a Lao artist it is also the 5th anniversary of the first National Lao American Writers Summit that I helped to convene with Catzie Vilyaphonh, Chanida Phaengdara Potter, and Saymoukda Douangphouxay Vongsay in Minneapolis at the historic Loft Literary Center.

I'm delighted to be reading tomorrow in the company of so many scholars, artists and community builders who have been a part of this journey. There are still many stories left to share, and I'm left thinking of the words of Winston Churchill. "This is not the end. It is not even the beginning of the end. But it is, perhaps, the end of a beginning." 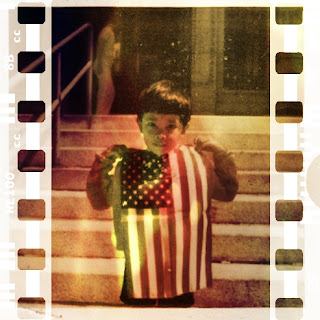 I'll be reading from poems reflecting the last 20 years of my journey in particular, including work that has appeared in On The Other Side Of The Eye, Bamboo Among the Oaks, The Tuk-Tuk Diaries: Our Dinner With Cluster Bombs, and Tanon Sai Jai. This includes "five fragments," "Burning Eden One Branch At A Time," and "The Last War Poem," many of which were also included in my work sample to the National Endowment for the Arts for my 2009 Fellowship in Literature.

Mai Der Vang’s poetry has appeared or is forthcoming in Ninth Letter, The Journal, The Cincinnati Review, The Missouri Review Online, Radar, Asian American Literary Review, The Collagist, and elsewhere.

Her essays have been published in the New York Times, the Washington Post, and the San Francisco Chronicle, among other outlets. As an editorial member of the Hmong American Writers’ Circle, she is co-editor of How Do I Begin: A Hmong American Literary Anthology. Mai Der has received residencies from Hedgebrook and is a Kundiman fellow. She earned her MFA in Poetry from Columbia University.