Ballad of the Cornelius G. Kolff 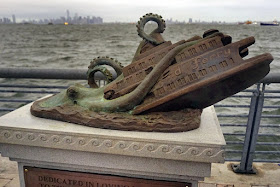 There are many reasons that the the famed Staten Island Ferry Disaster has been swept aside from most historical accounts, the most popular of them being that the assassination of John F. Kennedy overshadowed the tragedy at the time.

For those of you who do not recall, on November 22, 1963 at 4 a.m., over 400 passengers lost their lives when the Cornelius G. Kolff ferry was attacked by a giant cephalopod. It was most likely a member of the Enteroctopus Titanolocyathus who found its way near the Eastern seaboard, although some scholars have suggested other less plausible suspects.

You can find out more at the Staten Island Ferry Disaster Memorial Museum, of course.It's located at 1001 Richmond Terrace, Staten Island, New York. It's really worth the trip. Although it's a modest exhibit, what they have on display there really brings history alive, and the docents are so nice. Also, to note, the cafe's Fried Calamari easily rivals Lee's Tavern. 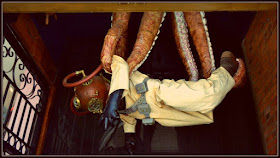 From a speculative poetry perspective, I'm of course fascinated by the songs and verse that the incident spawned. Most were deservedly forgettable, with cheap attempts to rhyme "octopus" or "kraken," although there were at least two from that year that made an effort to connect it to the work of early 20th century Weird fiction writer H.P. Lovecraft and his famed creation, Cthulhu.

The subject seems to have dropped off of the literary radar for most around 1973, although more research could certainly be done. The most "competent" of these, was perhaps the 1965 "Ballad of the Cornelius G. Kolff" by one Asenath Marsh of Red Hook, New York.

It begins:
"The legend lives on from Staten Island on down
Of the dreadfully fated Cornelius G. Kolff Ferry.
With a blissful load of 400 souls on a ship quite roomy,
There were cheers aplenty on their way to town,
Unaware of their upcoming doomy,
For that good ship seemed quite tasty
To a titanic octopus who was mighty, mighty scary..."

And from there, well, it's not much to bother with. It's a silly ditty, and certainly no "Wreck of the Edmund Fitzgerald." Hopefully, I'll have more to report for you all later on the matter. In the meantime, be sure to thank artist Joseph Reginella for bringing all of this back to our attention whenever you get the chance.
Share