I've recently been informed that former Science Fiction Poetry Association president Scott E. Green passed away September 29th. As I review his contributions and his legacy, it is clear he was a positive and engaging voice in our community who encouraged others throughout his extensive literary career.

Born June 2, 1951, Scott was a great champion of speculative poetry, and a prolific poet with a career spanning over 35 years. The son of Meyer and Paulina Green of Manchester, New Hampshire, he graduated from Derryfield School in 1968.

He was a graduate of Bates College (B.A. Asian History, Government minor) and Rhode Island College (M.A., American History.) He was a four-term member of the New Hampshire House of Representatives for Manchester, and also served as a Vice-President of the National Writers Union and a trustee for its At-Large chapter.

He was a man of many talents, including  archivist,  and journalist, with a particular expertise in antiques, collectibles, and auctions.  In addition to his speculative poetry, he also wrote for over 25 newspapers as a freelance reporter and feature writer, including general news and features. 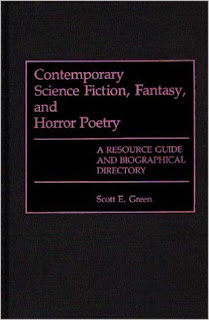 His work was anthologized in at least 20 anthologies, including The Williamson Effect edited by Roger Zelazny in 1997 and Project Solar Sail edited by Arthur C. Clarke in 1990.

Green was the author of one of the first reference books on speculative poetry, Contemporary Science Fiction, Fantasy, and Horror Poetry: A Resource Guide and Biographical Directory (Westport, CT; 1989,Greenwood). Additionally, he was the author of the first entry on speculative poetry that appeared in the New Encyclopedia of Science Fiction edited by James Gunn (NYC, 1988, Viking).

In the 1990s he wrote two non-fiction books, the 1993 Directory of Repositories of Family History in New Hampshire and the 1995 Isaac Asimov: An Annotated Bibliography of the Asimov Collection at Boston University.

His speculative poetry collections include Private Worlds, originally published in 1985; and expanded to Private Worlds: A Revised Atlas from Speaking Volumes, 2011. This was his collection of "very short poems, usually haikus, the commentaries on the body of work of various Science Fiction, Fantasy, and Horror writers."

He was also the author of  Baby Sale at the 7-Eleven, from Bloom Books, 1984, as well as Star/Sword Poetry Chapbook (Manchester, NH, 1984, Star/Sword). He considered his third collection Pulp: Poems in the Pulp Tradition, from W.P. Ganley, a limited edition chapbook printed in 2004. It featured cover art by Charles Momberger (1932-2014). 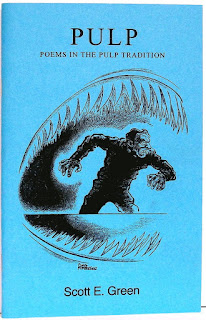 From 2010-2012, he kept extensive notes on speculative poetry markets, particularly publications that were closing at greengenrepoetry.blogspot.com . Unfortunately, his website at www.ScottEGreen.com has been down for some time, although it is possible to recover some pages from archive.org. There is a wikipedia entry regarding his life and work at https://en.wikipedia.org/wiki/Scott_E._Green.

Scott E. Green was also a member of Science Fiction and Fantasy Writers of America. Among his distinctions, he was the Poet Guest of Honor at the 1985 Boston Star Trek Convention. He was also nominated for the Kelly in Non-fiction Writing; the Rhysling Awardl Isaac Asimov Readers Award; and the Balrog Award for Short Poetry.

As the president of the Science Fiction Poetry Association, I did not get a chance to meet him personally, but in speaking with our members it is clear what an impact he had. I thank him for his time and service, and for all that he did to help our members and other writers explore the possibilities of speculative poetry and the imagination. I wish to give a special thanks to fellow speculative poet Herb Kauderer for bringing this to my attention.