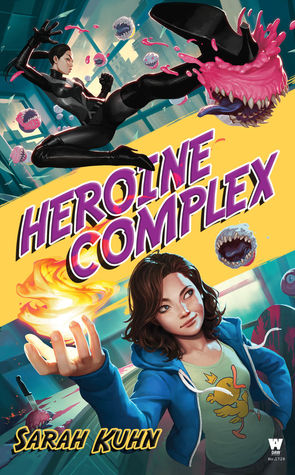 Coming this summer, I'm looking forward to Sarah Kuhn's Heroine Complex, which looks to be a fun work of Asian American speculative fiction.

Being a superheroine is hard. Working for one is even harder.

Evie Tanaka is the put-upon personal assistant to Aveda Jupiter, her childhood best friend and San Francisco’s most beloved superheroine. She’s great at her job—blending into the background, handling her boss’s epic diva tantrums, and getting demon blood out of leather pants.

Unfortunately, she’s not nearly as together when it comes to running her own life, standing up for herself, or raising her tempestuous teenage sister, Bea.

But everything changes when Evie’s forced to pose as her glamorous boss for one night, and her darkest secret comes out: she has powers, too. Now it’s up to her to contend with murderous cupcakes, nosy gossip bloggers, and supernatural karaoke battles—all while juggling unexpected romance and Aveda’s increasingly outrageous demands. And when a larger threat emerges, Evie must finally take charge and become a superheroine in her own right...or see her city fall to a full-on demonic invasion.


Per her author's bio:

Sarah Kuhn is the author of Heroine Complex—the first in a series starring Asian American superheroines—for DAW Books. She also wrote The Ruby Equation for the comics anthology Fresh Romance and the romantic comedy novella One Con Glory, which earned praise from io9 and USA Today and is in development as a feature film. Her articles and essays on such topics as geek girl culture, comic book continuity, and Sailor Moon cosplay have appeared in Uncanny Magazine, Apex Magazine, AngryAsianMan.com, IGN.com, Back Stage, The Hollywood Reporter, StarTrek.com, Creative Screenwriting, and the Hugo-nominated anthology Chicks Dig Comics. In 2011, she was selected as a finalist for the CAPE (Coalition of Asian Pacifics in Entertainment) New Writers Award. You can visit her at heroinecomplex.com or on Twitter: @sarahkuhn.