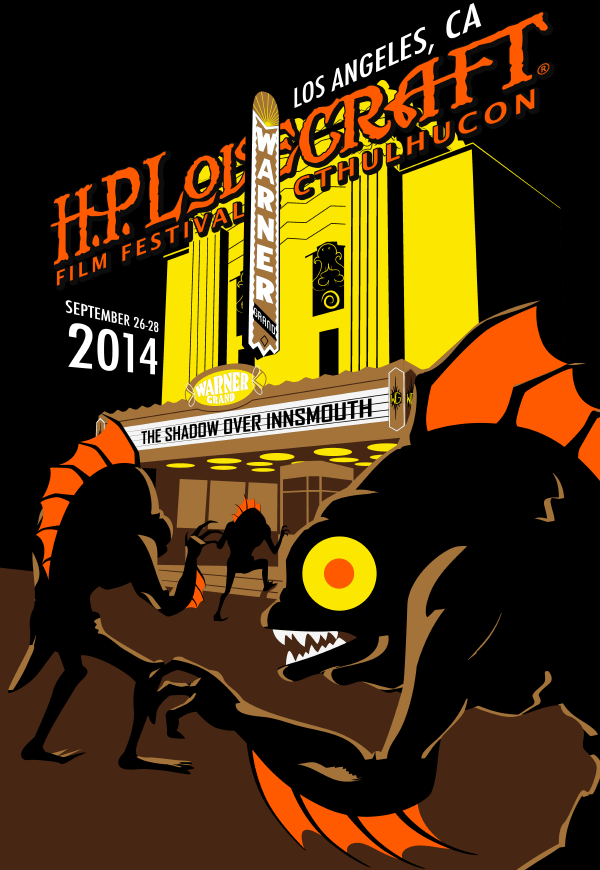 The H.P. Lovecraft Film Festival-Los Angeles is in the wind-down phase of their kickstarter campaign. They're successfully funded and now working on meeting their stretch goals. They are returning for the fifth year at the exquisite art deco Warner Grand Theatre in historic San Pedro on September 26, 27, and 28, 2014. This year's theme is Shadow Over Innsmouth.

Among the activities they're planning is a rare screening of The Creature from the Black Lagoon and numerous shorts from emerging and established short film makers around the world. Special guests will include the authors John Shirley, Nancy Holder, Gary C. Myers, Leslie S. Klinger, Cody Goodfellow, Ross E. Lockhart, and the poets Michael Tice and Scott Virtes.

The first stretch goal has been met, raising funds to commission an artist to paint a mural commemorating the festival and its ties to San Pedro. Skinner's previous work  can be found in Portland, Oregon, where they have a particular love for the Great Old Ones, clearly. 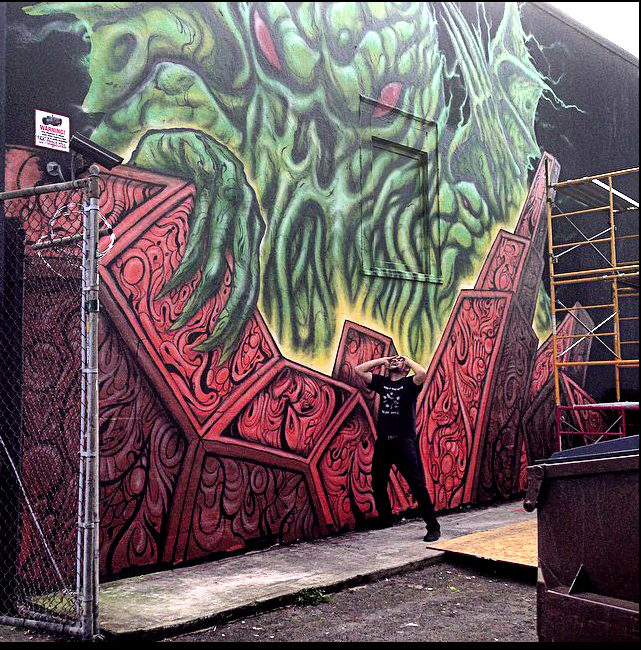 They have some amazing rewards for those who will be attending in person and those who must attend virtually. Be sure to check them out! The kickstarter campaign concludes at 9:40PM on Monday, August 25th. https://www.kickstarter.com/projects/906612014/2014-los-angeles-hp-lovecraft-film-festival-and-ct
No comments: 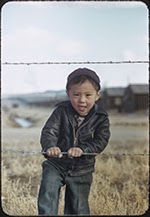 I hope the exhibit eventually comes to other communities across the US. It's well worth seeing.
No comments:

DEMONSTRA 30% off at Innsmouth Free Press until August 31st

My 2013 collection of poetry, DEMONSTRA is a nominee for the Elgin Award of the Science Fiction Poetry Association.

To celebrate, my publisher, Innsmouth Free Press is reducing the cost of DEMONSTRA until the end of the month if you go here and buy it directly from them. 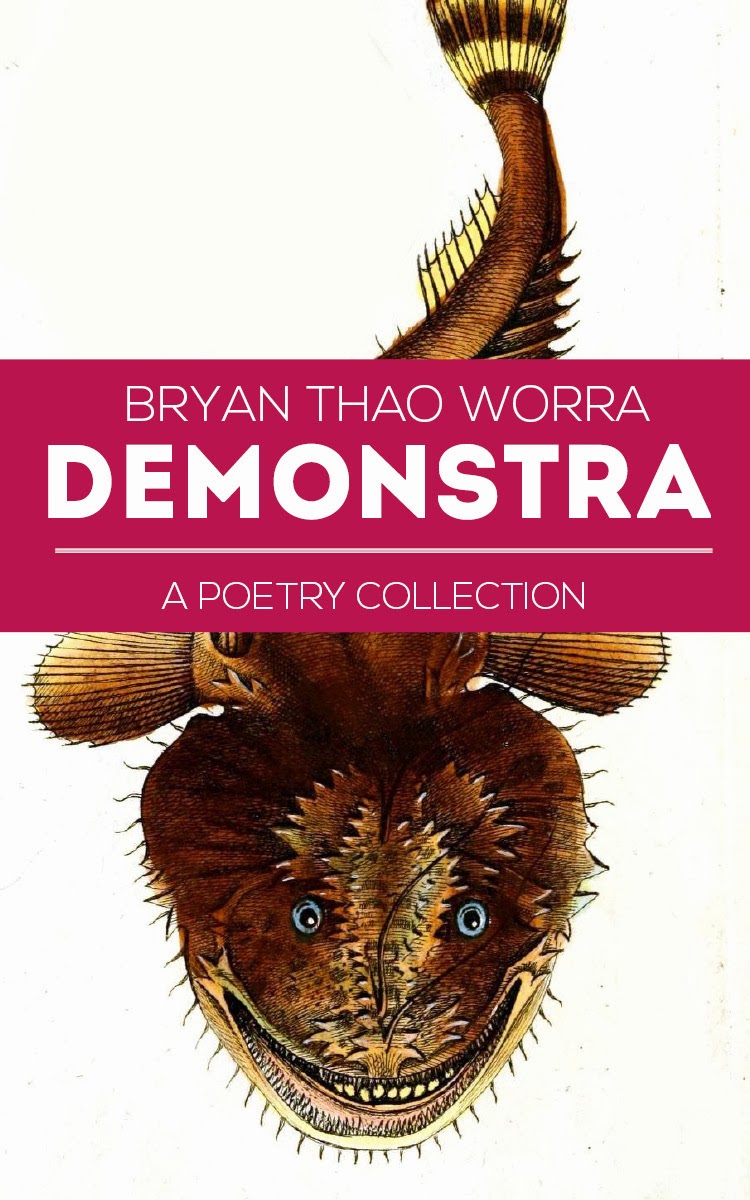 "In the depths, half-hidden under still waters, await strange and vicious creatures …. Cthulhu, Godzilla and nagas mingle in DEMONSTRA, a speculative poem collection which assembles 20 years of work by Bryan Thao Worra. DEMONSTRA is a book of things glimpsed out of the corner of the eye. It is about a reality that can never fully be demonstrated, authenticated, dissected, for certain visions always remain in shadows."

"Bryan Thao Worra is the first Laotian American to receive a Fellowship in Literature from the United States Government’s National Endowment for the Arts. He received the Asian Pacific Leadership Award from the State Council on Asian Pacific Minnesotans for Leadership in the Arts in 2009. His previous books include On The Other Side Of The Eye and Touching Detonations. He was a Cultural Olympian during the 2012 London Summer Games representing Laos. He’s a professional member of the Horror Writer Association and a regular contributor to Innsmouth Magazine."

You do not have to be a member of the SFPA to submit entries, but you do get a 50% discount rate ($1 per poem) if you are. The regular rate is $2 per poem. You can see more details and the full guidelines at: http://sfpoetry.com/contests.html

The Science Fiction Poetry Association was founded in 1978 to bring together poets and readers interested in science-fiction poetry. It has over 300 members worldwide and publishes several publications and resources for emerging and established poets. You can visit their website at: http://sfpoetry.com/

His poetry chapbook You Left Without Your Shoes was nominated for a 2009 California Book Award. A three-time VONA alum and recipient of residencies at Djerassi and Blue Mountain Center, he is completing a full-length poetry book. He is the poetry editor emeritus of Kartika Review. 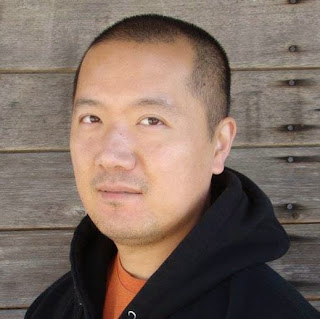 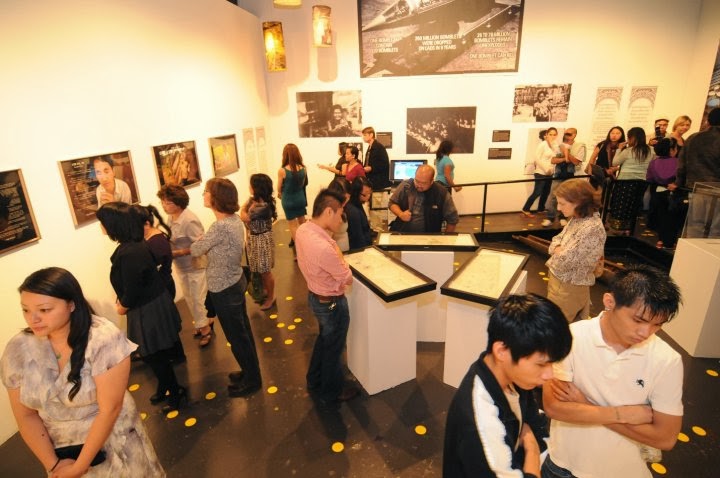 This August is the 3rd Lao Minnesotan Artists Heritage Month! A big congratulations to all of the Lao Minnesotan artists, their friends and family who've come together as a community to share their vision, their memories and dreams with each other and the world!﻿ 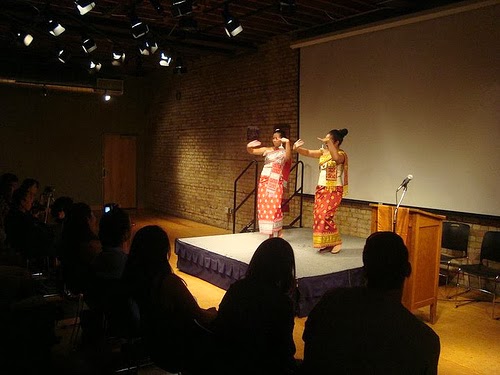 Over the years, Lao Minnesotan artists have been recognized by the State Council on Asian Pacific Minnesotans for their arts leadership and lifetime achievements, and many other exceptional accolades.

We're very happy to see the Governor recognize those contributions to international, national, and local arts and culture. Hopefully, this recognition will continue to inspire and energize others to add their voices to the great American tapestry, and to treasure the great stories and visions within themselves and all living beings.
No comments: 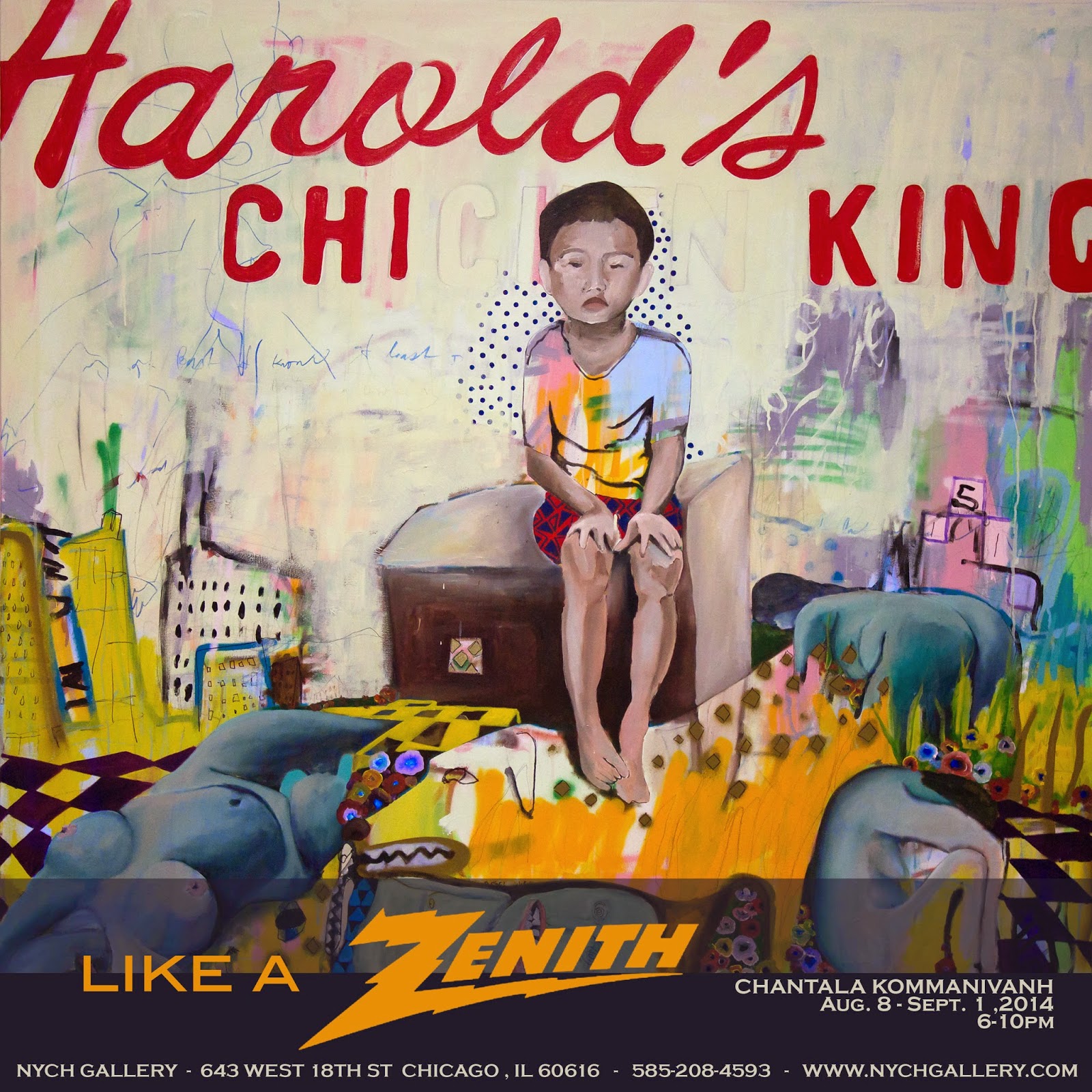 “Like a Zenith...” the latest exhibition of paintings by visual artist Chantala Kommanivanh is a personal narrative that regurgitates raw color, figures, and hood phenomena that is his life emerged and influenced by his Laotian heritage blended in hip hop and American pop culture.

Kommanivanh is interested in the way viewers ingest visual media driven culture and how it affects and impacts our identity. Immigrating to Chicago from Laos as refugees, he struggled with the complexity of duel identity in a violent foreign city; he sympathizes with those in the similar struggle.

The paintings in the exhibition are hybridized imagery where he sampled personal and found photographs as a way to remix and re-document.

“Like a Zenith...” details the point of Kommanivanh’s life that he come to learn, experienced, and often find surreal as an outcome. “You got to see it, to believe it...” 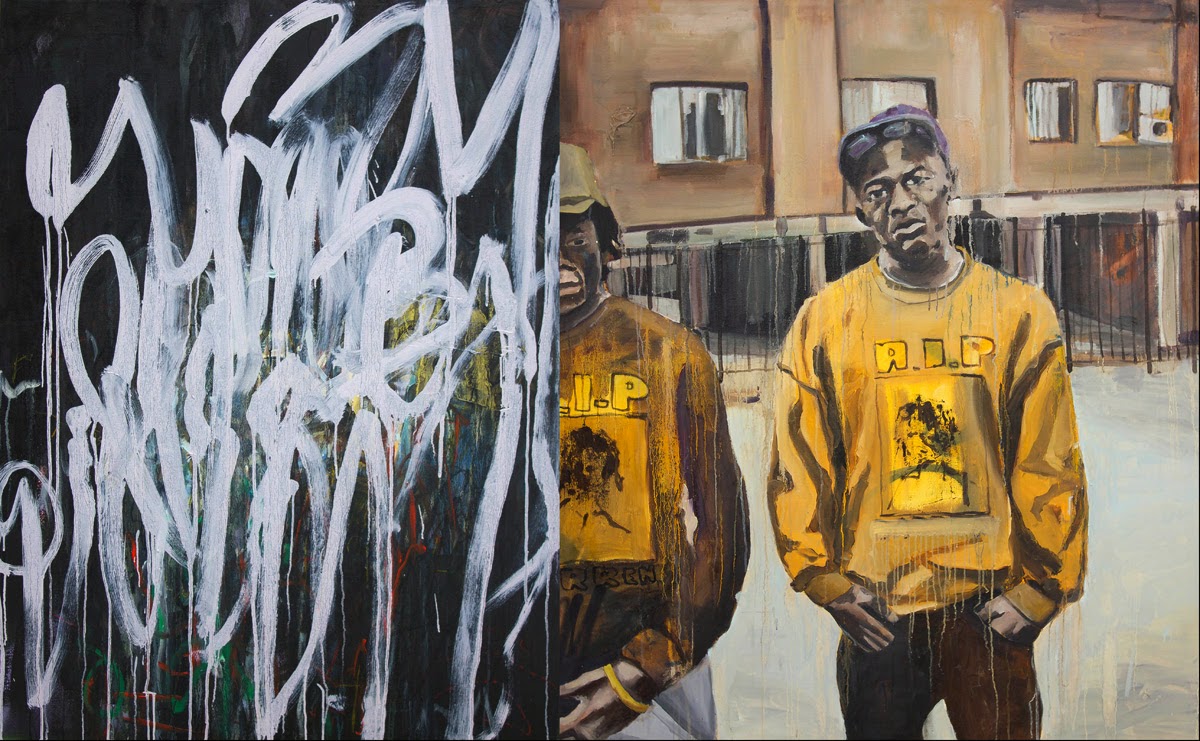