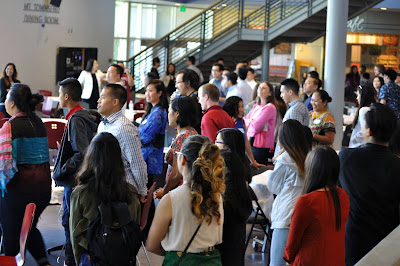 It was a Summit to remember as nearly 400 people gathered throughout the weekend at the National Lao American Writers Summit in Seattle, Washington at Highline College. It was a wonderful example of how communities can come together with a great intergenerational representation. Hats off to the Pom Foundation, the Kinnaly Traditional Dance and Music Troupe, AANAPISI, and the Lao Community Service Center of Washington for making it happen.

I personally learned much throughout the process including some great conversations on the nature of leadership and community building that leaves me optimistic for what's still up ahead. It was enjoyable seeing so many diverse voices and meeting new, emerging writers in our community. I have a feeling they'll go far. 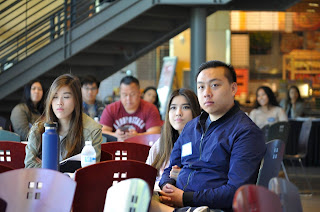 There were several faces I missed seeing from previous years, but it reminds me that whenever we gather, we must make the most of our time as artists, as fellow Lao and human beings. You never know when the next opportunity will be to meet. On a lighter note, in true Wacky Races fashion, at least five Lao American artists had a zany time trying to catch their planes. Shoot. I think we need to get a gumball machine for the next year we gather. 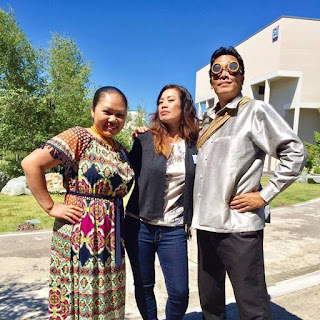 My role in this year's Summit was reasonably subdued, but included a poetry workshop and a discussion on writing and finishing our books, and why our stories matter. I also had the honor of doing the opening remarks on Saturday morning before the keynote speaker Saymoukda Duangphouxay Vongsay. I received a nice shoutout from the other keynote speaker, Krysada Panusith Phounsiri, especially regarding the tenth anniversary of my book On The Other Side Of The Eye. 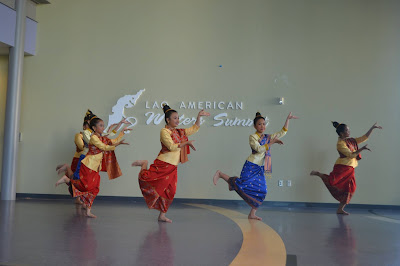 There were some exciting things to see such as Kohk and Sakm Ninja Foods, Buatique, and Bousa Design exhibiting there, as well as the spoken word artist Alina Amkhavong, the artist Sengsay Sayaseng, and Sarky and the Green Room. We also saw the return of Cooking With Nana. You can see more of my pictures from the weekend over at Flickr. There's a lot to process still, and I'll share more thoughts on the whole gathering in the coming months ahead. 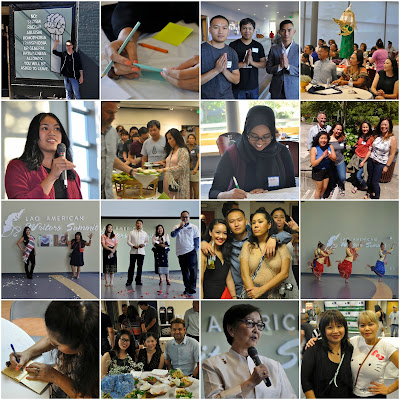 [Poem] The Grass, with Hindi and Thai translations 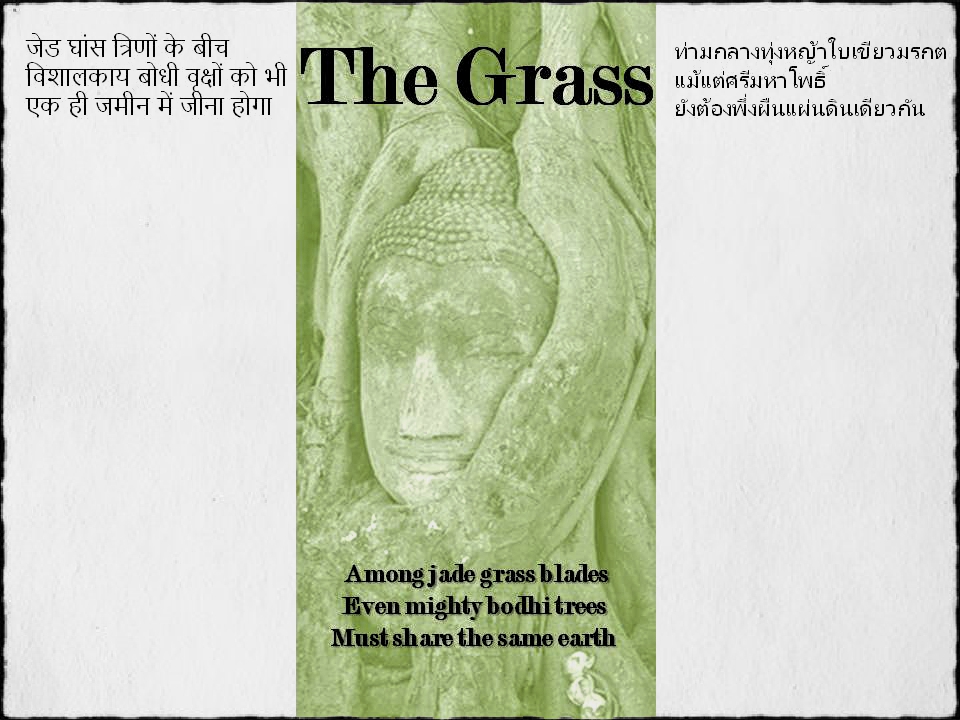 With a special thanks to poets Abhay K. and Joy Panigabutra-Roberts for their translations of this poem of mine, which first appeared in my 2009 collection Tanon Sai Jai.
No comments: 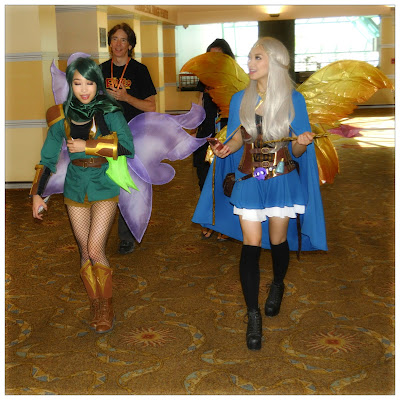 Sahtu Press and I had a chance to attend the inaugural Hydra Comic Con at the Santa Clara Convention Center in Palo Alto, California on June 17th-18th. They faced stiff competition from nearby Wizard World in Sacramento that seem weekend. You can see a full album of my pictures from the event at Flickr.

This was my last convention in California before I left the state back to the Midwest. This was produced by the same organizers who bring the popular Kraken Con to the region. For a first year it was very ambitious, and there were many positive things about the way it was organized and presented to make me hopeful for what they might bring to the community in the future. 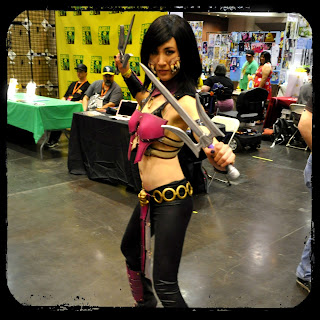 One of the fun pieces I picked up was Archie vs. Sharknado on a whim. I do have to say, I found it surprisingly accurate for both mythos that have sprouted up around their respective storylines. Which should not be taken as an endorsement of the book as an epic to stand next to Beowulf or the Ramayana, but technically speaking, if you love Archie and/or you love Sharknado, this is certainly as close to an accurate depiction of how things would go in that setting as you can ask for. Why you would ask for it is none of my business.

I was impressed by the presence of the obstacle course, a rock climbing wall, space for video gaming and playing Rock Band, as well as a space for crafts, photoshoots of your cosplay, and other amenities that might well drive how we could design future events like the Lao American Writers Summit. 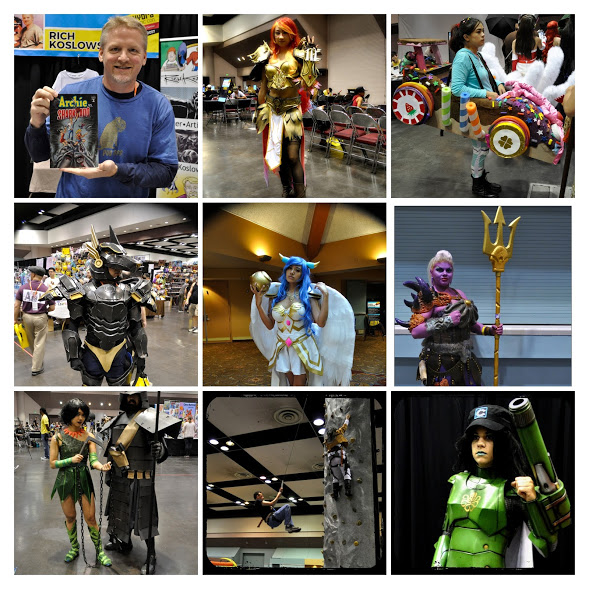 One of the interesting finds was a print of Filipina Super-heroine Darna by Danny Bulandi, facing her nemesis Valentina, a Medusa-like being who has fought her in film versions. I'll probably get into a bigger discussion about this character and implications for our approach to superheroes in the Laomagination project at a later point in time. 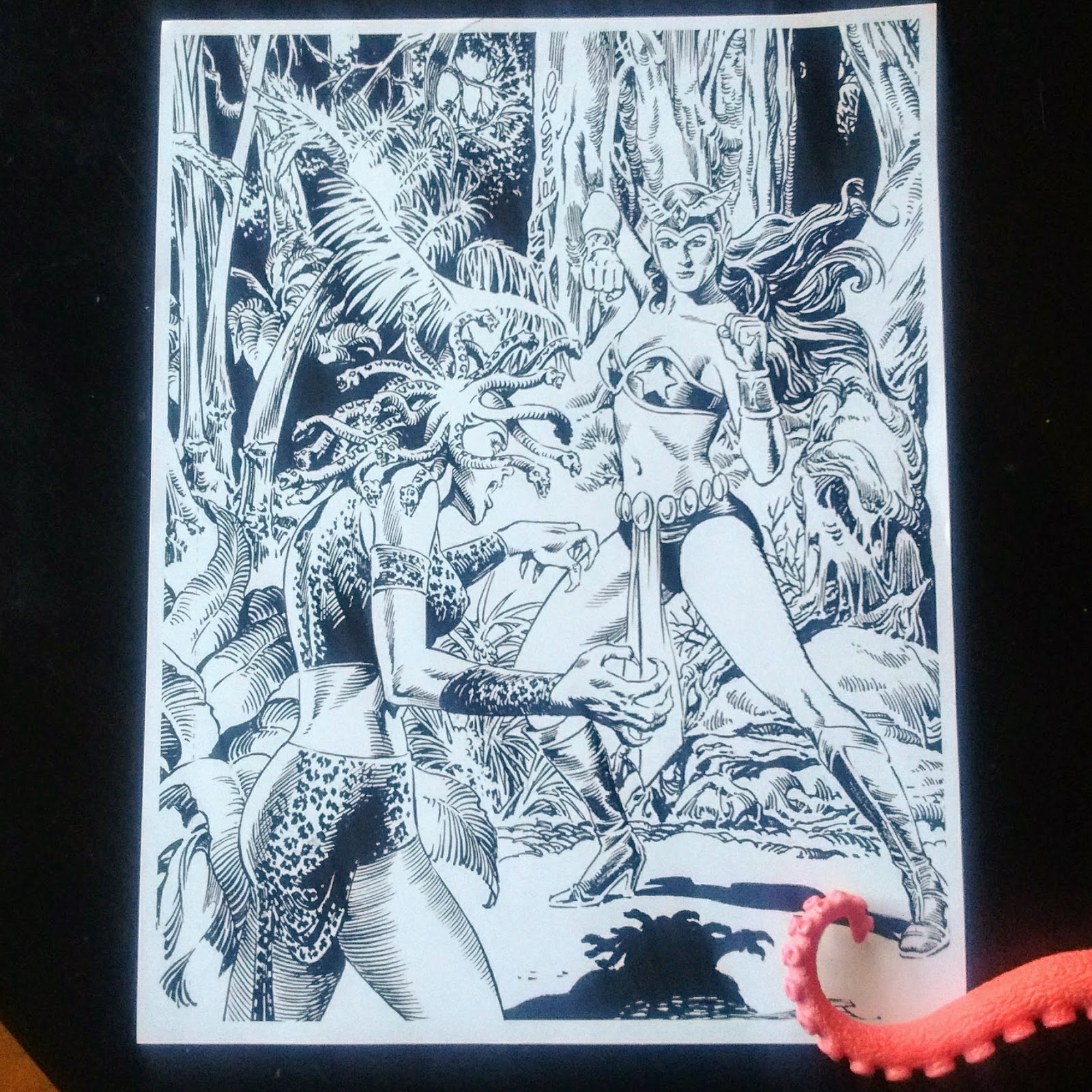 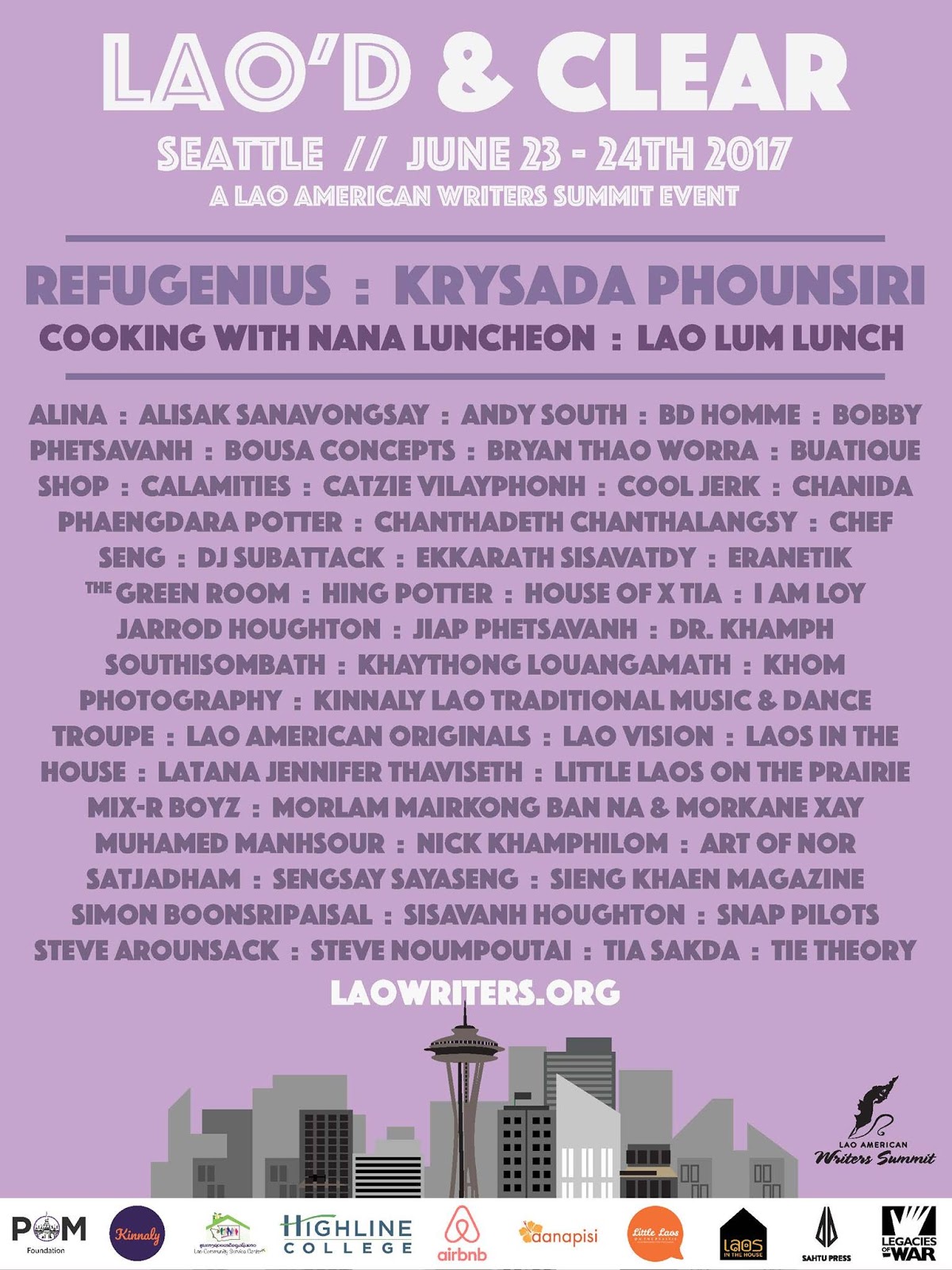 Coming soon to Seattle! The 4th National Lao American Writers Summit in Seattle at Highline College! See you there! Be sure to visit www.laowriters.org for more details!

A year ago, LitHub had an interesting article concerning the growth and development of the modern Cambodian literature scene. It's interesting to see how much of a shift in the Khmer literary infrastructure has taken place in just 12 months, and I do believe there are applicable lessons for the Lao community to keep abreast of as we continue our own development both in Laos and abroad. It's definitely something I'd add in to required reading for any conversations on building a Southeast Asian American literary movement. It's nice to see emerging writers like Sokunthary Svay, Sok Chanphal, and the Mekong Review getting some press coverage.

In the meantime, I find myself intrigued by the success of Indian literary festivals over recent years and how sustainable that might be for the Lao and Southeast Asians in diaspora. To me, the National Lao American Writers Summit isn't a festival, but a prelude to such events, of preparing our collective infrastructure so that as many of our emerging and established artists and writers have an opportunity to come together with enough notice to bring their best to community events.

I'd encourage many of our community members to take a look at events like the Latino Comic Expo that began with just 12 artists in collaboration with the Museum of Latin American Art for inspiration. What will be the next major project to organize in the years ahead? I'm intrigued by the Latino Comic Expo because of its grassroots approach to building community and how it intersected with their cultural institutions while still challenging our expectations of what our cultural artists can and should produce.

This goes back to my interest in a modified variation of the Creative Cities Network concept of UNESCO. I believe it's possible, but it's also going to be our life's work to make it happen. Ah, well. There could be worse fates to commit to.

In the end, can the Lao point to a sustainable and significant number of quality publishing houses with excellent editors and a diversity of opinions reflected? Do we have a wide range of educational programs focusing on domestic and foreign literature in primary and secondary schools as well as our universities? Do we have an environment in which literature, drama and/or poetry play an integral role?

Presently, I don't believe we're fully there yet. But we can make progress.
No comments:

Amazons, at last.
Overdue, but still thrilling.
When will she return?

So, beyond that, my take is that the Wonder Woman film should finally put to rest the idea that a woman as the lead protagonist can't be successful. This should be a seemingly obvious proposition, but ongoing arguments have been that exceptions such as the Aliens franchise; Fury Road; Rogue One; The Force Awakens; etc. have been ensemble films.

I'm certainly glad that Wonder Woman came out before the Black Widow film, and despite the flop that Ghost in the Shell deservedly was, hopefully there will be some good lessons extracted so that the script for the Black Widow film can have the even greater depth and thrills than even the very promising looking Atomic Blonde film due out later this year.

I'd easily place the Wonder Woman film as an excellent baseline for what any superhero film should aspire towards, up there with the late Christopher Reeves' Superman 2. (Sorry, I found the first Superman film a little dull to watch). I enjoy many elements of the Nolan Batman films, and the kitschy ambition of the Burton and Schumacher take on Batman but Wonder Woman, while dipping her toes in the Grimdark atmosphere of many DC comics films, ultimately embraces a brightness, a light that should be admired and brought forward in more works. Heroes who are actually heroes, trying to do the right thing.  I'd be worried because it's tempting to let such a character descend into parody. Wonder Woman as Don Quixote. But I appreciate that the film dares to present an unflinching, if challenged optimism. It's refreshing.

It's a fine film that kicks works such as Hancock and My Super Ex-Girlfriend to the curb. For non-comics fans, its accessible, and easy to follow. For fans of the comics, adjustments to the classic mythos of Wonder Woman are solid and provide openings to more interesting updates and storylines in the future that may well be worth watching.

Is it as groundbreaking and transgressive as Fury Road?Compared to that or Logan, Wonder Woman is very near, and what it's accomplishing is a bit more subtle, but sill well worth watching. I feel bad for Aquaman and other DC films if they aren't poised to address as many interesting questions as Wonder Woman sought to explore.

I look forward to discussing this with many of my students in the years ahead especially as we consider how a Lao and Southeast Asian perspective might have approached the material, and where her character might resonate with us. I do have one nagging quibble with the film that I won't get into for now because it would involve a massive spoiler, but it's a minor compromise given all of the other interesting things Wonder Woman explored for a Summer blockbuster.
No comments:

On June 20th, we’ll have the 16th observance of World Refugee Day, established by the United Nations in 2001 to mark the 50th anniversary of the 1951 Convention relating to the Status of Refugees. For fairly obvious reasons, this is a subject that is close to my heart as part of the Southeast Asian diaspora, even as I’m saddened the topic remains timely.

This year, I’m sharing 31 poets who have been refugees or have roots in the refugee diapsora, and I encourage my fellow poets and readers to also push themselves to read more poets whose lives have been touched in such a way. Not just the poems that touch on the refugee experience, but their wider bodies of work. Because of my particular specialization, I’m focusing on Southeast Asian and South Asian poets this year who have books or a substantial body of spoken word work out in the public. Of course, there are poets from many continents and nations whose experience should be brought forward into the conversation. I encourage you all to make your own lists, as well, and share them with the community. In no particular order: