William Blake was an English poet, painter, and printmaker. Like many artists of his age, he was mostly unrecognized or considered mad while living, but his importance and significance have grown over the centuries. He was something of a mystic and visionary but while he was reverent of the Bible, he was hostile to the church. Overall, he's considered difficult to classify.


In Blade Runner, one of the interesting lines by Roy Batty is a misquote of Blake's poem:


"Fiery the angels fell; deep thunder rolled around their shores; burning with the fires of Orc"

This line was suggested by Rutger Hauer, adapted from Blake's America: A Prophecy.


"Fiery the angels rose, and as they rose deep thunder roll'd. Around their shores: indignant burning with the fires of Orc." 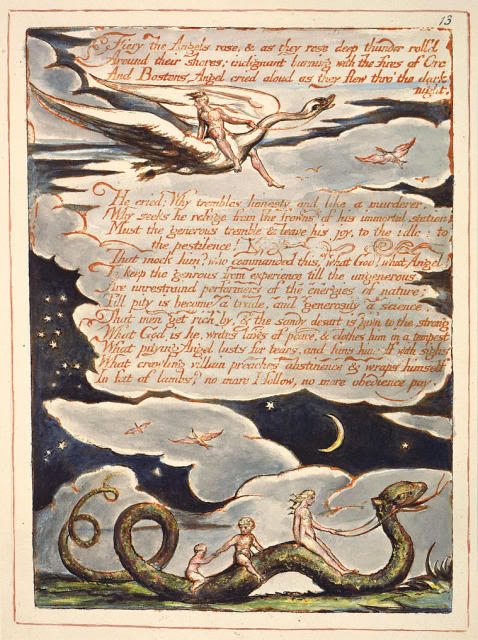 Interestingly, Orc in the mythology of Blake is a complicated figure, and not the monstrous sea monster or humanoid cannon fodder of Tolkien and 20th century fantasists. Orc appears in four of Blake’s prophetic books: America, Europe, The Book of Urizen and The Four Zoas

Shortly after his birth, Orc transformed from a worm into a powerful serpent. There's all sorts of relationship drama that results in one character using the Chains of Jealousy to confine Orc to a mountain, until the power of Orc's imagination awakens a deity who frees him to then go on a rebellious rampage. Orc is a force of revolution and revival with most interpretations regarding him as a largely positive figure of creativity, passionate energy.

The Tate notes that "the scholar Foster Damon believes that the name Orc derives either from Cor (the Latin word for heart), or from Orca, meaning ‘whale’." 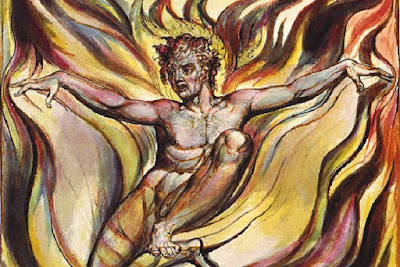 Which isn't to say this makes Blake very easy to read by today's standards, but it's still one of the fascinating, more modern efforts to create new mythologies for the world.

But what are we to make of the significance of Roy Batty "misquoting" within Blade Runner? Is it a signifier that the lead replicant is fallible? Or is this a knowing shift to the text and its meaning. Many scholars have pointed out that the character of Orc embodies the young striking down the old, and has parallels in the revolt of  a son against the father. As the replicants of Blade Runner try to revolt in order to renew and extend their lives, and fight their way towards their creator, Eldon Tyrell, the imagery seems apt. Orc's activities are driven by emotion, and gradually degenerate into unpredictable chaos, terrorizing those around him. So, too, the degeneration of the replicants even as they seek vindication or redemption for their excesses. It's a matter of some interest to consider what it means for the angels to fall, according to Roy Batty. With whom, then does he feel the replicants should identify with, even as they're shackled with such limited time remaining to them?

But these are some of the ideas that I've considered at length as I composed my own books On The Other Side Of The Eye and BARROW, which even have a poem or two directly and indirectly inspired by Phillip K. Dick's Do Androids Dream of Electric Sheep and Blade Runner, in addition to thematic elements I thought compelling. I think there's some very interesting material worth revisiting in Blake if one makes the effort.

OMG, Blake was an SF dork! That explains SO MUCH!

I love his work. Poetry and paintings

It would make sense. Batty is threatening, desperate, without any reason to care about taking life. If people are the angels, fiery they fall, having risen so high as to be able to create replicant humans, is making Batty’s intention clear at a very sophisticated level. Orc represents the creative impulse. The creator in flames is the father Tyrell, Batty the prodigal son returning, challenging the father and punishing the father. As Siegfried destroying Wotan and the earlier mythological references.

I had no idea.

I feel the expression "fell" intends to "falling onto something", like an attack from above.

Roy and the other replicants have "fallen" back to earth.

Blake was heavily influenced by Milton. The fiery fall of Lucifer in Paradise Lost can't be discounted here, and Roy knows he has fundamentally rebelled in returning to earth. Or in choosing do so...

There is also the prodigal son narrative, and the line about burning too brightly (flying too high), so consideration of a comparison to Icarus is possibly relevant.

And that brings me back to the biblical concepts. "Pride goeth before destruction, and a haughty spirit before a fall."

Roy's audacity is his most admirable quality, and also the source of conflict.

In the end, when Deckard fails utterly, on account of being too human (frail) to finish the job, Roy becomes human (empathetic) enough to save him. It is only through the process of coming to grips with mortality, and accepting it, which allows him to do this. It is not dissimilar to the way in which Achilles is finally able to process his anguish through forgiveness of Priam.

Yeah, I think he's intentionally misquoting. At that point in the story, Roy is playing around with the idea of free will. In Mythopoeia, Tolkien suggests that children imitate their parents, not out of malicious mockery, but in order to understand them. He argues that men invent myths for similar reasons, imitating their creator through the very act of creation. Roy's rearrangement of Blake demonstrates his intelligence and creative capacity (it is not an inelegant composition), and also his desire to have a part in the enterprise: to have a stake in contributing to the human experience.

Ultimately, I think it is part of a mythology that Roy is constructing for himself; he wants to believe his actions matter: that he has a soul.

A Hay, I agree on all counts. Good analysis of two of my favorite artists, Blake and Scott.

I wouldn't argue this point strongly so with that.. Batty speaks this to Chew what, about a quarter of the way through the film. By the end of the film Batty is dead from "accelerated decrepitude" the slight misquote might be the beginnings of deterioration. just passing it along. Just watched the Director's cut last night and there are a few visual hints now there. Pris, in Sebastian's apartment, playing with a doll chopped at the midsection was one I hadn't noticed/seen before.

A Hay, good analysis. I think the 'angels falling' definitely refers to the replicants. Note the visual cues once Batty has killed Tyrell; Batty descends in the lift, with the stars in the night sky receding behind him through the windows. Blake is invoked almost as a prophecy early in the film, which shows why repeated watches reward the viewer and how multi-layered this film is.

Blake is somehow timeless, a la The Scriptures he divines surrealisticalky especially visually

Rutger Hauer came up with the misquote deliberately for the scene. It was about not explicitly revealing that they were replicants, but giving a clue as he is going to try to find Tyrell.

He finds Chew working there and knows who he is, and thus begets one of the most underrated scenese.

"Chew, if only you could see what I've seen with your eyes."

Considering the fact that the slight modification of Blake's "America" is uttered well before he plays chess, through Sebastian, with Tyrell and wins (if I recall), I don't agree that his mind was faltering regarding the word "fell".

I sincerely think the sense is pretty obvious here.
"Fiery the angels fell" goes like "Landed" "posed on the surface" "Boldly arrived".

I still think its a double-meaning, that he has both made landfall, and that he has fallen in a biblical sense. That coming to earth in breach of the prohibition is a sinful act for Roy.

Ironic too, since earth is presented in all the grungy dystopian glory Ridley Scott can muster, and is "fallen" itself in comparison with the supposedly lustrous "off-world colonies".

I agree the word "fell" is not a mistake, but his mind could still be faltering in various ways. To err is to go off the rails. To stop obeying the rules. A knight errant must fail or ERR by definition, in order to go on his errand. Must WANDER from the straight and narrow path. Roy has already broken the rules, and he's not about to balk at reworking Blake to express himself in the moment. Maybe that's some "broken" programming, but only in the way that a prisoner breaks his manacles. His intellectual ability may even be improving while his ethos dissolves.

Roy is clearly deeply intelligent, and retains much of this capacity at the time of the chess game. However, I don't think the chess game is proof that Roy isn't already losing it. He's on an emotional roller-coaster, and mostly keeping it together for the sake of the others. A far cry from the steely-eyed Yule Brynner android in Westworld.

In fact, his emotion is the thing that makes him human enough to be as intelligent as he is. And it comes with all the pitfalls as well, just as knowledge of good and evil comes with a shameful awareness of nakedness.