In the course of my continuing research on the visual art of modern Laos, it became very clear that many of the artists in Vientiane were still interested in the possibilities within Cubism and the work of Pablo Picasso. While some merely imitated the form, others were more ambitious with a capable understanding of the spirit of his artistic process.

A decade ago I had a chance to spend a day at the Picasso Museum in Paris. It left an impression on me, although I much prefer the work of Giacometti, Modigliani and Rodin. Looking at the variety of styles Picasso experimented with over the years is definitely inspirational. It's also comforting as I see some of the radical differences in my own art from one decade to the next. Or even one year to the next. 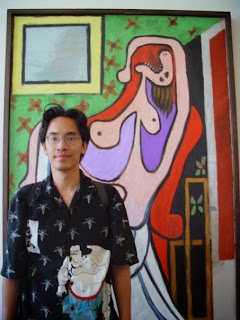 I'm particularly interested in where we can go now. We have a significant body of Lao artisans familiar with the techniques and approaches of Picasso and other Cubists. What might we consider genuinely interesting conversations to have, from an arts educator's perspective?

There have been some particularly interesting Picasso exhibits this year.

In Chicago, they celebrated a 100-year relationship with him. In 1913, the Art Institute of Chicago became the first art museum in America to present the work of a young Picasso. To celebrate, they brought together over 250 examples of his work. It begs the questions, who have we displayed as an emerging artist in 2013 who we'll be celebrating with such joy in 2113?

The Museum of Fine Arts in Houston did a focus on his black and white work. They asserted "Whereas Picasso's art is often seen through the lens of his diverse styles and subjects, the recurrent use of black, white, and gray is frequently overlooked. Picasso Black and White demonstrates how the artist was continuously investigating, inventing, and drawing in austere monochromatic tones throughout his career."

Some years back, there was an exhibit called Erotique, which was "drawn from personal experience, imagination, mythology and earlier art, these images - by turns humorous and melancholic, enraptured and enraged - explore an almost encyclopedic range of sexual impulses, practices and human desire." I would be curious to know how many of our Lao artists would have responded to this exhibit, and how much would be seen in general display. 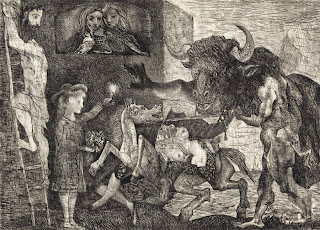 Very soon, Christie's Auction House will be selling the Jan Krugier collection of 29 Picasso originals anticipated to fetch almost 90 million dollars. Again, I wonder, which of the examples from the Krugier collection might particularly inspire our modern Lao artists, and which would seem wholly alien to them? Might we have encountered La Minotauromachie re-interpreted through figures drawn from Phra Lak Phra Lam instead, such as a dreadful Nyak? Could we have seen Lao traditional dress depicted with the same abstraction as Claude et Paloma? What would it mean to do so? How would Lao artists respond to the voluptuous, twisting forms of Baigneuse sur la plage? Or Tête (1962-1964)? Would any of the other pieces from the Krugier collection have changed the way Lao art teachers consider Picasso's work and the lessons they impart to students today?

One part of me wonders what it would have been like if Laos were to have purchased the collection intact in its entirety and presented it on display in Vientiane, or the art schools in Luang Prabang or Savannakhet. There would certainly be the question of preserving it from the elements, but that effort, that process alone could be quite interesting, with techniques later employed in other buildings throughout the country.

How would you approach giving Lao art students a meaningful and innovative understanding of Picasso's techniques and methods?