The Middle of Everywhere

While traveling to Lincoln this month, a friend gave me a copy of Nebraskan Mary Pipher's 2002 book, The Middle of Everywhere, a book examining her experiences working with refugee communities adapting to America. 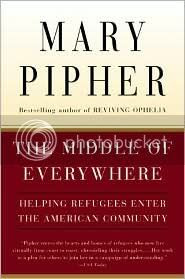 The back text is a little florid, and threatens to set up a rather saccharine 'plucky refugees seeking the American Dream' narrative.  However, this is more the work of the marketing department than Dr. Pipher's own writing within.
Most people may know Dr. Pipher from her book Reviving Ophelia. Pipher reveals a wide range of experiences across age, gender and culture as she works with different refugee communities.
The documentarian in me can't help but wonder what wound up on the cutting room floor from this book. It's an interesting approach. One can see comparisons to The Spirit Catches You and You Fall Down, but without the parachute journalism.
Much of Pipher's book is written as an accessible guide to the world of the culture broker, allowing readers new to the issues of refugees in America a humanizing glimpse of the faces and stories involved, and how people are working to help them adapt to life here. It's not a book of policy or immigration. She leaves that for others to debate. The book keeps the jargon to a minimum and descriptions of the various cultures are vivid but not execessively sentimental or exoticized. This is to be admired. We see both the cultures and the individuals within those cultures at once, in most cases.
Many of her anecdotes and stories from her experience resonate deeply with my own encounters over the years in my work with Southeast Asian refugee resettlement and with other refugee communities. For those of us working in non-profits, the appendices are perhaps among the most practical and a solid overview of good practices.
So, seven years later, does the book still have relevance? As we approach the Census 2010, we're going to see some new numbers for the Southeast Asian and African refugee communities, as well as those from war-torn Europe and elsewhere.
As I look around me in Minnesota and see the emerging Karen and Bhutanese refugee communities, and the Montagnards resettling in North Carolina and elsewhere, I know there's still a need for community advocates and cultural brokers.
Stepping out on a limb here, I would even suggest that even though many would consider Hmong, Lao, Tai Dam, Khmer and Vietnamese refugees as still "settling in," our communities, too, should be reaching out to assist those just recently arriving.
Because we've been there, and being as close to the tipping points as we have, we know how much difference individuals can make in each other's lives.
Dr. Pipher's work is ultimately hope-driven, and she sees an enormous range of positive outcomes that emerge from making a space for new communities within the American tapestry.
Make no mistake, The Middle of Everywhere needs to be read with other books. It's a good introduction, but definitely not an end point. But I would recommend it as a book should be read by anyone beginning to work with refugees.

There's much to do in NE. For a new person entering the Asian American community in NE, this book gave a nice introduction to refugee experience. But I agree with you that it has to be read with other books; those have yet to be written by the refugees and their children, etc. It's a young immigrant community still work on surviving and excelling. I don't know how long it will take to see these people entering the literary scenes as in other places. We can always hope.