Kang Wannian lives in the Yunnan province of southern China, and claims he encountered the tiger and killed it in self-defense while gathering clams at night at a nature preserve near the Lao border. Four of his buddies were also jailed for sharing the tiger meal. He claims he didn't know it was rare. He's going away for 10 years for killing a rare animal and gets an extra two years for illegal firearm possession. He also got a fine of ca. $70,000.

Less than 1,800 wild Indochinese tigers are left in the world today. 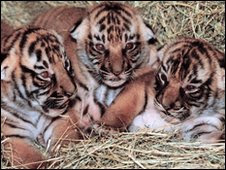 Scientists have also found a new warbler named the "limestone leaf warbler" because its breeding habitats in Laos, which is a region where several other unusual species have been discovered including the Laotian rock rat, a unique striped rabbit and the bare-faced bulbul songbird, as well as many new species of frogs and salamanders. Of course, most of them are also now facing extinction like the Irawaddy freshwater dolphin. It's such a shame we're on the verge of eating our distinctive biodiversity, our heritage, to extinction.