Approaching One Year of BARROW! 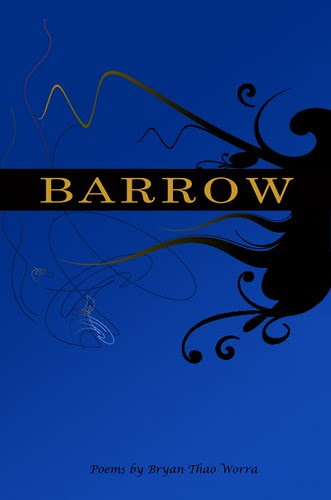 Released in October 7th, 2009 BARROW is my current collection of science fiction poetry exploring language, tradition and myth. It asks where the narrator fits within those words and worlds.

The release was held at the True Colors Bookstore in Minneapolis on the same day as the Twin Cities Book Festival and several other great events.

BARROW includes some of my work that has appeared previously in other journals such as Whistling Shade, Northography and Tales of the Unanticipated. BARROW also debuted some new work as well. Some, such as My Autopsy, Thank You, were written during my first years at Otterbein College. I'd mentioned it last year that it's refreshing to still feel confident about older pieces even after so much time had passed.

Even more so than in On The Other Side Of The Eye, BARROW featured more poems discretely about the people in my life. It continued to traverse a lot of ground as a transcultural adoptee and as a Lao American. It also featured the cover artwork of Vongduane Manivong, who's since taken the plunge as a full-time artist in Texas.

In October, I'm sure we'll be doing lots of special promotions to celebrate. Stay tuned! :)