One of the interesting projects due at the end of July is submitting to Brian M. Sammon and Glynn Owen Barrass' Steampunk Cthulhu anthology for Chaosium. "The age of steam meets the age of Cthulhu, in a past where technology unbound warps Victorian Britain and the world at large into a dark Steampunk reality." is the overall aim.

So, I find myself preparing an all new short-story, wondering how to pull it off.  As much as I'd love to try it, I don't think I can do a Steampunk Cthulhu speculative poem justice at the moment. I should say, though, more than a few tongue-in-cheek titles have come to mind, such as the "Cogs of Cthulhu,""Anna and the King in Yellow," "The Steam Over Innsmouth," and "The Contraption Out of Space." It would be particularly apt to do a steampunk take on "The Fungi From Yuggoth" given that it was a long speculative poem from Lovecraft. Perhaps "The Last Brain to Yuggoth"?  Nah.

On a more serious note, however, these are some of the questions I find myself considering as we prepare such a story.

How do you successfully reconcile two seemingly contradictory genres. It's not the subjects. As we've seen with anything from Hong On the Range to Firefly, you can make space westerns work, for example. But to me the greater challenge is resolving the underpinning philosophies. 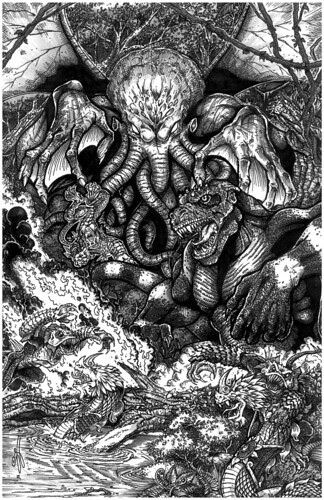 In Steampunk alternate history, most of the protagonists are outsiders who are alienated from the mainstream society. This is compatible with a Lovecraftian story. However, we find ourselves faced with a genre that typically positions the retro-future as a space where individual pluck, technology and science can overcome any obstacle to save the day. It's often optimistic noir with more than a tinge of romanticism and nostalgia for a by-gone era that never was.

Lovecraftian stories on the other hand, are compatible with Steampunk settings for the brooding, noir atmosphere of decadence and decay. But they also operate within a cosmos where there are things humanity was not meant to know, cannot know, without descending into cosmic insanity. Science, reason, human efforts are feeble and meaningless in the face of all of this.

While both genres are capable of dealing with shades of grey, a Lovecraftian protagonist at best can hope to forget what they have encountered, or at least is going to be squished quickly by the end of the terror. So, what do we do with Steampunk protagonists operating under Lovecraftian conditions?

Of course, to create a good story that is appropriate to the theme I feel you have to navigate a fine line to avoid the criticisms of both genres. For Steampunk, the possibility of Empire-fetish, for Lovecraftian stories, the possibility of exoticizing and demonizing the Other, given his historic fear of foreigners and just about everything else under the sun. Steamcraft at its worst could be filled with many pro-Colonial stories of putting down subhuman, degenerate savage races. And that should raise eyebrows.

Since my hope is to turn in a Steampunk Cthulhu short story set in Laos, which once lived under French colonial rule during this era, there are therefore particular issues I consider such as the necessity to tell a story in which falang appear at all, or have to be acknowledged. With the 160 different ethnic communities that lived in Laos at the time, it's possible and perhaps preferable to create a lost tribe to serve as antagonists rather than use an existing one.

For this story, I'd also rather keep away from noble-fetish, romanticizing the role of elites of the society. In traditional Southeast Asian literature, there's often a tendency to ignore the story of 'commoners' and everyday people in the narratives. It's almost always centered on the princes and princesses. Which to me goes against the 'punk' aspect of steampunk. Their protagonists often work best when they're NOT the ones supposed to be in power.

And of course, as I try to incorporate authentic or historically plausible elements into this work, I hope not to have the problem I had with 'The Journal Who Shall Not Be Named' that apparently had no problem dealing with shoggoths and deep ones, but suggested no one was going to buy into a race called the Hmong, among other issues.

But overall, I've found the process to be invigorating and enervating. With a limit of 8,000 words, it seems there's surprisingly little space for world development. I would say the breakdown thus far looks like: 25% world building and setting, 25% characters, 25% plot action, 25% technology and horror. But we'll see what comes out in the final equation.

How would you approach the Steampunk Cthulhu concept?

Interesting. I've been playing around with ideas. So far I've got a steampunk St Petersburg and a nihilist main character currently out of favour with the Elder Tzar.

I'd love to be able to pull it off. It remains doubtful.

Well, Tzar-spawn of Cthulhu could certainly be an interesting premise. The other question is what are our obligations in such a story? How do we surprise while still giving readers what they want and what they understand of the tropes? In the end, it often comes down to who's the horror lurking within? The one to the left, the one to the right, everyone? If the final answer is no one, and it's all just a product of 'paranoia' prepare for torches and pitchforks on the doorstep. So, strange as it sounds for horror, how do we breath new life into such a genre?

It would be relatively easy for me to write a Lovecraftian story with the furniture of steam punk.


What I found interesting in your post was the question you raised of reconciling the two philosophies of steam punk and the mythos.

But to how to blend in steam punk philosophy, without as you mentioned resorting to "pro-Colonial stories of putting down subhuman, degenerate savage races."

How would my characters function in a world ruled by an Elder elite and policed by Shoggoth. Which led me tentatively to a nihilist cult of collaborators, and from there to Steam punk Russia where Communism was suppressed.
With this story (tentatively considered) there'd be no lurking horror as there would be in classic mythos. The plot would reveal the compromises my MC has had to make to function in her world.

Well in the old days, Chaosium did Cthulhu by Gaslight at http://catalog.chaosium.com/product_info.php?products_id=6672 which was very Anglocentric. I think a Steampunk Russia could be very interesting. What might happen if you find a guy who's even more whacked out than Rasputin, for example? Of course, setting pieces in Russia, one might have to look at Charles Stross' A Colder War for an interesting approach. (Although I still think there were a lot of good missed opportunities there.)

Setting the stories outside of Victorian Britain would be very interesting. Sadly being British, that's a disadvantage for me. But your story set in Laos sounds great.

I should try and get hold of Stross' book, thanks. To the library.

He's got a copy online over at: http://www.infinityplus.co.uk/stories/colderwar.htm although I find the format a bit of a pain to slog through. I think a reader's traction may vary with this one.

Well, you know, free is always awesome. I think it's interesting trying to tie in the myth of Koschei the Deathless into Cthulhu's that is not dead which can eternal lie... and I thought a cold war setting could have been awesome but it's told from a non-Russian point of view and I find myself saying Stoss doesn't see what he did...

I hope you make it in, Bryan. Steampunk not set in merry old England has a lot more appeal to me.

Interesting post, which I ran across because I'm working on a story for the same anthology (I'm attempting a Dreamlands/Korean steampunk thing, similar concerns and difficulties though in this case it's Japanese colonialism); but in fact, I'm linking it in a post on the subject of Koreanizing the Lovecraftian aesthetic, unrelated to the story I'm working on. (But related to a film script project, and my struggle to adapt the whole Lovecraftian worldview to a specifically Korean setting.)

I'm curious about the Lao cultural (and especially mythological) elements and how well they mesh with the Lovecraftian mythology: I don't know much of the fantastical bestiary of Laotian mythology beyond nagas, but I got the feeling when I was there that they were kind of too, er, "respected" (?) to be slotted into a horror framework easily.

Also, while it's a Malaysian tribe, instead of a Laotian one (not terribly far away, but not quite next door either) there is a story that uses an invented hill tribe as the big baddies; it's "The Man with the Black Horn" in Dark Gods by T.E.D. Klein. If you don't know the story, Klein confabulates a tribe that has a name close to the name of some imagined tribe or race that Lovecraft (or someone else in the canon) actually wrote about, which is fun. But most of that story occurs in an airplane, or in the USA, and is mostly a kind of pastiche of Frank Belknap Long, supposedly.

You'll definitely want to check out the Kurodahan Press series Lairs of the Hidden Gods that collects Japanese Lovecraftian stories written first and foremost for a Japanese audience, not gaijin.

The Lao would definitely never present a Nak/Naga as an adversary. The Ngaosrivathana classic 'The Enduring Sacred Landscape of the Naga' outlines the very special relationship of the Naga to Lao culture, although Hmong often just see them as beings to fear in the lakes.

However, the Nyak/Yak/Yuk, or however you want to spell it corresponds to the Rakshasha, and when you're talking 'giant, often green, flesh-eating, shapeshifting magic warrior-demons' who live in the remote countryside or the Island of Lanka, connecting them to a Great Old One on the Island of R'Lyeh becomes an interesting opportunity.

But a creature like the Phi Krasue, which is a floating disembodied head with its inner organs attached seems like an easy thing to engage with Lovecraftian themes in the aftermath of films such as Re-Animator or From Beyond.

There's a long discussion I regularly have off-line about the work I do rehabilitating the 'Tcho-Tcho' from Burma that Lovecraft et al created in the early 20th century. Supposedly sub-human worshippers of the Great Old Ones, the Delta Green writers used the backstory of the Hmong as the background for the Tcho-Tcho with all of the usual intercultural sensitivity one might expect. So, I find myself often now working to write the Tcho-Tcho in a way that tries to present things from their perspective.

Long and the short, it could be done. Cryptobotanical horror is also another zone where I think we can do a lot incorporating Lao mythology and Lovecraftian themes.

Also of note is that almost all of the mountain tribes have a very strong fear and aversion to the man-tigers/weretigers in the jungles. You can see how I approached some of these issues with my short story 'A Model Apartment' which blended Pickman's Model with Dreams In The Witch House and Hmong mythology. It's not a perfect work, but it shows how we can approach it.