Earlier this year, a few press releases and images went up promoting a new Lao horror film called Chanthaly. from Lao Art Media. This would be their first entry into feature films. It was scheduled for a September release in 2012. However, I can't seem to find any recent news or updates. Hopefully, it will be of the same caliber as the Thai film "Shutter" and really provide an eerie, exceptional horror experience that brings in the best of both Lao culture and aesthetics but also international notions in a way that doesn't throw us under the proverbial bus. 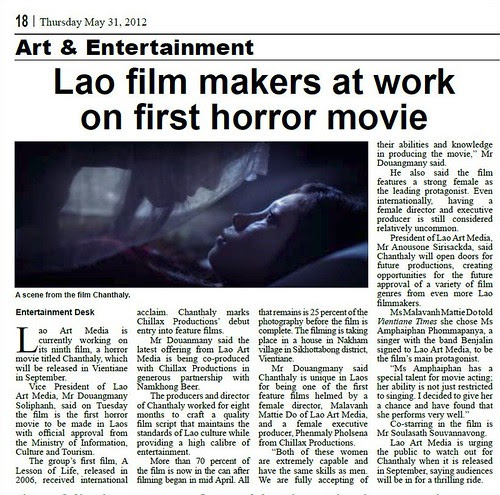 Email ThisBlogThis!Share to TwitterShare to FacebookShare to Pinterest
Labels: cinema

Thanks for posting the article for your readers.

Chanthaly was delayed a bit, but showed this past weekend at the Luang Prabang Film Festival. There's a review up on the Thai Film Journal Blogspot.

We're now hoping to release the film this spring in Vientiane!