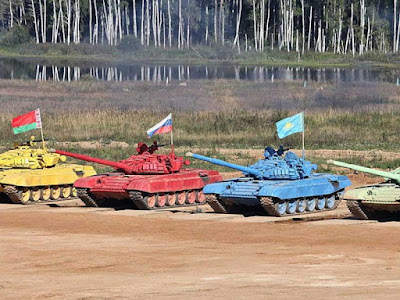 The Laotian Times is reporting that a Lao tank crew will be among the competitors in the International Army Games this year that's being hosted by China and Russia. They'll be driving a T-72B3 Battle Tank. Their first match will be against Uganda, Angola, and Tajikistan. Semi-final races will take place from 8-10 August, with the four finalists to compete on the closing day, August 12.

It looks like the event will be quite a spectacle. Alas, no word yet on the names of the particular crewmen who will be competing this year for Laos.

Using a three-man crew, the T-72B3 is a Russian tank, updating the classic T-72 with a "new engine, new gunners sight, new fire control system and have some other improvements," according to Military Today. It can reach a top speed of 70km/hour or 43 mph. For comparison's sake, the US M1 Abrams can reach speeds of approximately 72km/hour or 45mph. Some tanks have been able to reach close to 60 or 70 mph, for short periods of time under the right conditions.