Arcana is a long-running horror convention that bills itself as "a convention of the dark fantastic." Arcana is held annually in St. Paul, Minnesota and typically features a famous author or artist from the dark fantasy genre as its guest of honor. Arcana programming includes a variety of panels, talks, and films. Other programming includes a book and art auction and an "open" reading. The presentation of the Minnesota Fantasy Award is a key feature of each year's convention. 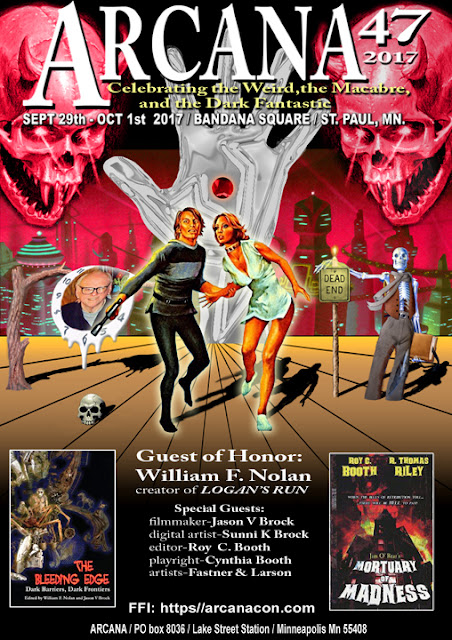 On Saturday, I'll be presenting at 11:00-11:55 a.m., Mainstage. for the panel: Giants in Fact, Folklore, Fiction, and Film. For Arcana's annual “Monster of the Year” panel, this time we look at giant guys and gals, from dinosaurs to the Giant of the beanstalk to Bigfoot, King Kong, Godzilla, and on. Eric M. Heideman, mod.; Scott F. Wyatt and I will discuss with the audience. I'll be bringing in a particular conversation on giants in Southeast Asian myth and legend, naturally! Or unnaturally, as the case may be for this convention.

From 4:00-6:00 p.m., Mainstage is the Minn-Con Auction. The Minn-Con Auction keeps the Arcana parent organization afloat through a blend of books, magazines, DVDs/BluRays, artwork, and miscellaneous items. So much fun it’s scary! I'll be one of the auctioneers with Dwayne H. Olson!

I'll also be helping with the late-night Scary TV Party at Krushenko's: "That signpost up ahead…Do not touch your television set. " starting at 9:30PM until whenever the last person falls asleep! If they dare!

From the speculative theater perspective, Roy C. Booth will be there, as will Cynthia Booth! Roy C. Booth hails from Bemidji, MN where he manages Roy's Comics & Games (est. 1992) with his wife and three sons. He is a published author, poet, journalist, essayist, gag writer, and optioned screenwriter with over 900 publication credits, and internationally awarded playwright with 57 stage plays published (Samuel French, Heuer, et al) with 825+ productions worldwide in 30 countries in ten languages. He is also known for collaborations with R Thomas Riley, Brian Keene, Eric M. Heideman, William F. Wu, Axel Kohagen, and others!

Cynthia Booth is a published poet, short story writer, and internationally awarded playwright presently also residing in Bemidji, Minnesota. They’ve been long-time talented friends and supporters of my work, and I’m excited to see them a part of this year’s Arcana to hear what’s new with them in their creative journeys!

I'll see you there!