November is National Adoption Month, so I usually write a few posts on films like Blade Runner. One interesting bit is that the chess game played in Blade Runner is adapted from a real match known as 'The Immortal Game':


This match was played on June 21, 1851 by Adolf Anderssen and Lionel Kieseritzky. The theme is usually considered the use of very bold sacrifices to secure victory, showing that as few as three active pieces could be worth more than a dozen at home.

There's a lot that can be said about the metaphor of this match. The whites sacrificed both rooks, a bishop, then ultimately, the queen, to secure a checkmate in what seems like it should be a devastating form of self-defeat. In the end, the blacks are defeated by two knights and a bishop. This was from an era when bold, rapid moves of gambits and counter-gambits were applauded, while holding on to too much material was scorned by most players.

In Blade Runner, the game is more than just a fight of corporately-manufactured 'replicants' against their human creators. 'The Immortal Game' is an apt description of the search and struggle for the longer life the replicants, and really, everyone, thinks they want in the film.

During the Minnesota Transracial Film Festival this month at the Oak Street Cinema, I read my poem 2019 Blues for the first time from BARROW.  My new book frequently draws elements and structure from Blade Runner and the Phillip K. Dick novel that inspired it, Do Androids Dream of Electric Sheep?
http://www.youtube.com/watch?v=zK7DBo9Ye6Y

The chess metaphor and 'The Immortal Game' also serve as symbols of our desire to escape our status as pawns, sacrifices and disposable humans that are bought and sold, trafficked to the highest bidder. Although the line is excised in later versions of the film, the classic remark that resonates with me is: All he'd wanted were the same answers the rest of us want. Where did I come from? Where am I going? How long have I got?

Next to The Seventh Seal, where a knight challenges death to a game of chess until he can get home, Blade Runner is one of the great classic games of chess depicted on screen.

'The Immortal Game' was played as an informal game played during a break at an English tournament. I find it a classic example of how often the most remarkable things happen in between what's 'planned' to be the great works.


You can see this in the case with Chungking Express, which, despite being intended as a quickie to recharge the creative juices, wound up being far more popular than director Wong Kar Wai's epic Ashes of Time. Funny how things work out like that.

The term checkmate comes from the Persian phrase "Shāh Māt" which means 'the King is 'ambushed, helpless or defeated.' For a while it was thought to mean 'The King is dead.' The etymology seems to suggest the king is in mate when he is ambushed, at a loss, or abandoned to his fate. For some unrelated fun, here's a few retro shots of my old co-workers and my neighborhood playing a game of live chess in North Minneapolis in 2008, as part of the FLOW Northside Arts Crawl. These pictures were taken by blogger Johnny Northside. 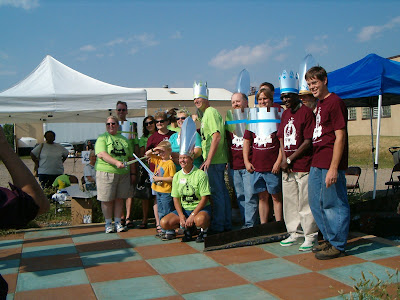 This was one of the last projects I helped to coordinate for the organization as a staff member, but it was a memorable one between members from the City of Minneapolis and the residents of the Hawthorne Neighborhood. For locals, that's the Hawthorne Hawkman as a rook in these shots. 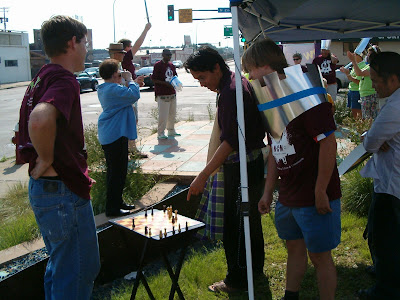 It would be fun to see the Hawthorne neighborhood bring back the tournament again. We even had a blog dedicated to the idea, but alas, we haven't really revisited the idea yet. Maybe in the future, and hopefully before 2019.