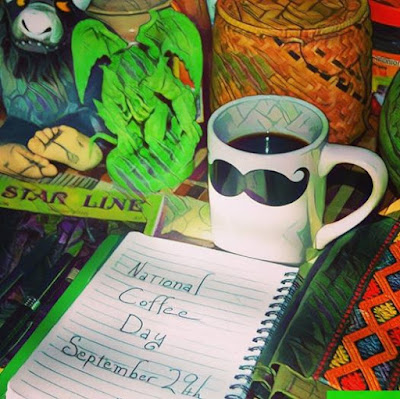 What would the future be without coffee, brownian motion and whatever comes next? If you've got a speculative poem about coffee, share it here or on social media with the hashtag #sffcoffeepoem!

In the meantime, here's one of my older pieces, The Spirit Catches You and You Get Body Slammed, which first appeared in the Paj Ntaub Voice Hmong literary journal in the early 2000s.


The Spirit Catches You and You Get Body Slammed

I came to Missoula to ask him
About the inner workings of ua neeb.
To understand the symbolic significance of split horns
And spirit horses who trace their noble smoky path
To turns of an auspicious moon above ancient Qin.

My tape recorder at the ready,
My fountain pen freshly filled with indigo ink,
My ears, my eyes, my heart:
All were humbly waiting for
The wise shaman's words
To impart to the next generation
Of youths who sought this fading voice.

He spoke, and my interpreter said:
"Who's your favorite wrestler?"

I wasn't certain I'd heard properly.

"Grandpa wants to know who your favorite wrestler is."
My interpreter turned back to the shaman, speaking Hmong.

Smiling, he then offered me a cup of hot coffee.
I was too stunned to say anything more
For the rest of the afternoon.

Years later, I still have dreams of shining Shee Yee
Smashing writhing demons into blue turnbuckles,
Watching next to a hundred smiling shamans in the Audience