A Thought On Resident Evil: Extinction 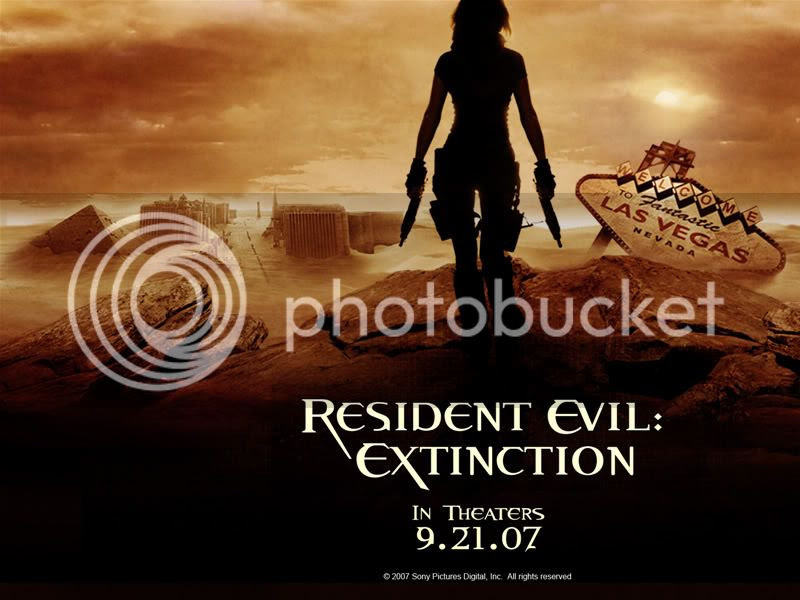 There's the classic Francis Ford Coppola moment when he shouts, Apocalypse Now isn't about Vietnam, it IS Vietnam.

Which seems a terrible thing to bring up when I think that Resident Evil: Extinction isn't a 'movie' about zombies, it IS the zombie.

It holds the distinction in my mind of being one of the bigger budget films that is not so much a film as a series of derivations, of moments cribbed from other far better movies ranging from Road Warrior to The Birds, to Dawn of the Dead, both versions!

In an effort to avoid giving this terrible film more brain cells than it deserves, I will keep this note short other than to say: A mindless, tediously lumbering assembly of cannibalized bits of once-good films you want to flee from in terror lest it get your brain.

My god, in a weird post-modern way, it's almost brilliant.

But somehow I doubt that was the serious intention of the crew and the studio at the time. On to better things:

Save yourself the trouble of watching this film and go read World War Z: An Oral History Of The Zombie War, a far more entertaining book than just about any zombie film that's come out lately.

"Post-modern" again, eh? Where was that fridge and where did I put it? ;D

Interesting concept, that the film itself would be the "zombie."

That would define "Fifth Element" quite nicely, I think. It _is_ nothing more than a jumbled-together juxtaposition of other (sooo much better) movies' parts.

But then, too, is an interesting Eccleston film, gritty and real (well, relatives-ly, that is): "28 Days."

Not a film that is a zombie, that is, no, definitely not.

Hopefully I'll get my discussion of "28 Days" up at Slice of SciFi or somesuch. :)