An Interview With Patrick Rosal 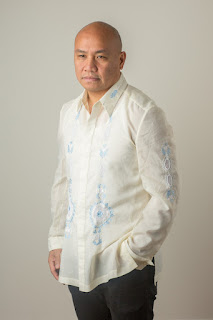 His chapbook Uncommon Denominators won the Palanquin Poetry Series Award from the University of South Carolina, Aiken. His poems and essays have been published widely in journals and anthologies including North American Review , Pindledyboz, Black Renaissance Noire, Brevity, Columbia , and the Beacon Best. His work has been honored by the annual Allen Ginsberg Awards, the James Hearst Poetry Prize, the Arts and Letters Prize, Best of the Net among others.
What are you working on these days, artistically?
Patrick Rosal: I have a collection of poems called BONESHEPHERDS that's all but done. For the last year, I've been working on a novel-in-verse called The Lovers of Paz y Pelea. I'm hoping I can get some serious work with that done in the next year or so. I also I am in the middle of a project with a young Chamorro film director named Alex Muñoz.
He's directing an NEH-funded documentary about Filipinos who built a large part of Guam's infrastructure after WWII. I've also been writing essays, some about dance, some about teaching. I've got plenty of ideas, but there's rarely enough time to immerse myself in a single project, let alone any number together.

What's been the biggest challenge for you, as a writer?
PR: The challenges vary. Time is always in issue, because you have to have a roof and food, so you have to find a way to make dough. In my case it's teaching, which I'm as committed to as my writing. More centrally, I think my challenge is in the truth-telling. How do you get the poem, the essay, the story that is complicated and true, rather than the easy language, the fashionable language, the language of effects.

That last one plays itself out in many ways. I'm always putting a new challenge in front of myself. The voice in BONESHEPHERDS for example tends more toward rhetoric and meditation than in my previous two books. It was, at times, daunting to acknowledge and confront that voice. I didn't want to continue to write the poem I knew I had already mastered in the first two collections.

How did you first get into writing?
PR: I came to it reading and writing late in life. I transferred to a small Jersey school that had communications under their English curriculum so I had to take all these lit courses (which I had avoided at Rutgers). I really enjoyed them, more than I expected to. Toward the end of undergrad I took a creative writing class with a poet named Paul Genega, the most influential teacher I've had. I started reading and writing poetry seriously then.

Who's on your reading list these days?
PR: So much. I'm doing a reading course here at UT with a fabulous young poet named Donika Ross. So, with her, I'm re-reading Robert Hayden, Etheridge Knight, Thylias Moss (whose novel-in-verse SLAVE MOTH is riveting), Michael Harper, Rita Dove, and Gwendolyn Brooks. I just finished Cormac McCarthy's THE ROAD, a history book about boxing called BEYOND THE RING. I'm in the middle of Galeano's first volume of TRILOGY OF FIRE, a music history book about Equal Temperament, and a Pennsylvania poet named Christopher Bursk.

You have to know what you love, before you know what you refuse to love. I mean what kind of poetry, but I also mean modes of silence, solitude, dancing your ass off, being lost on strange avenues. I mean simple meals and extravagant ones, long kisses on cold streets, bad TV. I mean a good football game and the smell of new tar. I'm saying, live a full life. You don't have to live like an artist. You just have to live. Be disciplined in the life of your art, but do not sacrifice a real life in the world for that discipline. Reality is not a pressure on the nobility of poetry; it's the source of it.