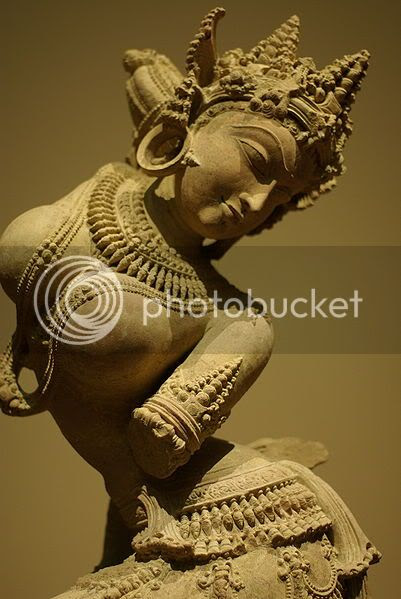 An Apsara goes by many names including Tep Apsar in Khmer, Accharā, A Bố Sa La Tư, Bidadari or Vidhya Dhari. In the simplest term, you can think of them as an attractive cloud and water spirit who exists in the celestial realm. As with many beings of this sort, they are able to change their shapes and have special dominion over gaming and gambling.

The European counterpart is typically considered a nymph and siren, but they also have duties similar to valkyries. They're supernatural, beautiful and elegant, with a tradition of dancing, usually to the music made by their husbands in the palace of the gods to entertain the gods and fallen heroes.

Some Apsaras are seen as nature spirits who can lure a man to his death- but it should be noted that most existing literature suggests it's because he just doesn't want to leave and grab some lunch, so they typically starve to death, entranced by the Apsara's beauty, and not due to violent action.

The ancient courts of India identify 26 Asparas who each embody a specific aspect of the performing arts. As can be expected, they are also associated with fertility.

There is an interesting and popular story of an Indian epic heroine, Shakuntala, who is the daughter of a hermit-sage whom the gods sent an Apsara to tempt. The deities were fearful of the amazing spiritual energy the sage was accumulating, worried that he might one day challenge them.

So, reluctantly, the Apsara Menaka was given the duty to 'distract' him. As she approached the sage, the wind god tore away her garments, and even the sage couldn't ignore that. At this point, the account says they had sex "for some time," but then he went back to his business of meditating and became a deadbeat dad while Menaka had to return to the heavens, and she leaves Shakuntala on the banks of the river to be raised by birds and eventually, adopted by a passing stranger.

But it worked out.