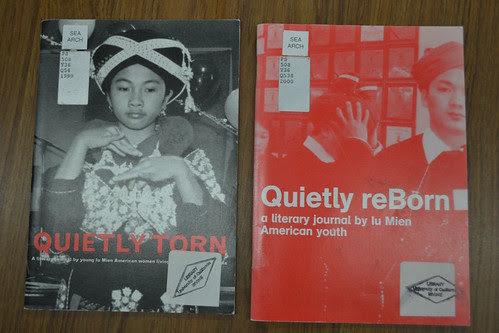 In Southeast Asia, the Mien, also known as the Iu Mien or occasionally Yao are one of the largest cultures throughout the region, tracing their origins back over 2,000 years in Southern China, with over 470,000 in Vietnam alone and 60,000 in Northern Thailand.

They are also one of the major ethnic groups in Laos, one of over 60 distinct cultures there.  It can be a little confusing because Iu Mien don't call themselves Yao and not all Yao are Iu Mien- They could be one of several other groups, such as the Lanten aka Kim Mun.

Anthropological distinctions aside, most Mien in the US are here as refugees because of their family's roles during the war for Laos. Most are rebuilding on the West Coast, especially in California such as Fresno, Oakland, Richmond, and Sacramento. You can also find Mien in Oregon, Washington and even Alaska, which is quite a contrast to Laos, presumably.

Mien culture is very distinctive, many following a classical form of Taoism, but as with many cultures in the region, they are also influenced by Buddhist, Christian and animist folk beliefs, and of course, in the US, increasing exposure to pop culture and hip hop.

But where I'm going with all of this is regarding Laotian American arts since the end of the war in 1975. We know that there are at least three major literary movements that took place within both the Lao and the Hmong community that gave rise to collectives such as the SatJaDham Lao Literary Project, the Paj Ntaub Voice literary journal (both around 1994/1995) and efforts to create significant theater and arts organizations, especially over the last 20 years.

For the Mien, the most significant of the literary journals that they have produced to date were the slim volumes Quietly Torn(1999) and Quietly reBorn (2000), with editor Fam Linh Saechao, Katherine Cowy Kim, and later Christine Wong. These are very hard to find, but I had a chance to see them at the UC Irvine Southeast Asian Archive this April.

Quietly Torn was a literary journal featuring writing by Mien-American women from Richmond, California and has often been praised for its striking and honest accounts of the Mien experience. Quietly reBorn focused more on youth voices, but included a number of oral histories, childrens' sketches and continuing discussions about culture, identity, religion, work and play, even wrestling with the question of what it means to be a hero.

But where are those voices today?

I found myself moved and saddened reading the Mien accounts because it is clear so many of them wrestled with many of the same issues as the rest of us but at the moment, we appear many more years away from seeing a fully realized expressive culture in the US, of Mien speaking in their own words, on their own terms about their journey through America and the rest of the world.

It reminds me we cannot take our stories, our arts for granted, or we can lose so much.

Hi! I was wondering where can I purchase these two books?