Preliminary notes on the language of dystopia 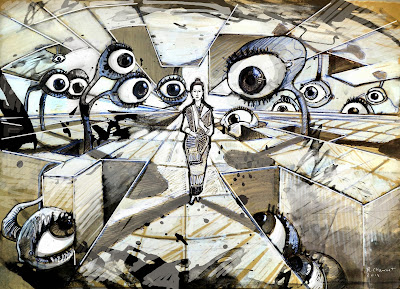 What is the language of dystopia?

A common element of modern science fiction featuring dystopias is the use of a futuristic language or jargon that signals to the reader that you're no longer in a contemporary setting, and that in the future, the language of the dominant society will be significantly different or evolved. I'll be giving a discussion on this topic at this year's CONvergence in Minneapolis because it's a topic of particular interest to me as a poet. There are definitely some significant intersections in our art form and the languages of the future.

The aim of the presentation is to demonstrate to both readers and writers that there are several different strategies to create a sense of "dystopianese" and each method has its particular strengths, weaknesses, and symbolism. For this discussion, I'll be looking at the language of dystopia in science fiction written in English. For other scholars, I would strongly hope work will be done to start looking at the dystopian language in the science fiction of other countries, such as Japanese, Chinese, Russian, French, German, Arabic, and Spanish, just to name a few.

In English-language dystopia, however, we can point to several basic textual strategies that have been popular for the last century. The English of the dystopian future often finds itself riddled with repurposed language, neologisms, portmanteaus, pidgin/polyglots, calques and loanwords, among others. Authors are typically careful not to include so many new words that the English becomes unrecognizable and unintelligible.

Prominent examples we can look at:

George Orwell's 1984 and his concept of Newspeak remains one of the classics. It was well-thought out in terms of creating a language that was repurposed and logical within that world, and the language itself was almost a character. At the very least, it was a very specific tool for creating and reinforcing the dystopia, erasing its enemies and keeping Big Brother plausibly in control. It also set a precedent where much of the vocabulary became a part of real life, such as doublethink, doublespeak, and the memory hole. Compare it to the vocabulary of Aldous Huxley's Brave New World whose dystopian vocabulary has not had as far a reach. 1984 demonstrates a case where the dystopian language is the mark of the mainstream, dominant culture. 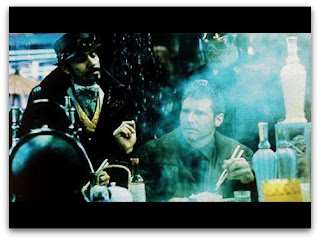 In contrast, we have Ridley Scott's Blade Runner an adaptation of the dystopia of Philip K. Dick's Do Androids Dream of Electric Sheep. It demonstrates a dystopia with a polyglot culture. In the beginning, we're introduced to the protagonist at a Japanese noodle bar in Los Angeles where a detective played by Latin American actor says "Monsieur, azonnal kövessen engem, bitte!" a combination of French, German and several other languages. Interestingly, a class/culture divide is established- that only street-level, everyday people use this kind of language. Throughout the rest of the film, everyone else the characters run into use normal or formal English, with only a few idiomatic phrases to signify the future, such as the police officer who says "Have a better one."

One might look at the post-Apocalypse dystopia of poet Cathy Park Hong's award-winning Dance Dance Revolution for a more expanded sense of where this could go interestingly. Of course, A Clockwork Orange features the Russian-influenced Nadsat language used by the delinquents in that story, which was, for its time, a radical, almost vulgar proposition.

In Farenheit 451, language is at the heart of this dystopian tale, and the language in books that prompt too much emotion is blamed as the source of humanity's suffering. What becomes interesting here is that the language of the future remains largely unchanged, except for a few instances, where it is repurposed and inverted. A "fireman" is no longer someone who puts out fires, but someone who sets them. In the end, the rebellion is revealed to be a process whereby everyone becomes a living book.

Joss Whedon's short-lived Firefly series takes a lot of heat for it creating the society where the Chinese are the dominant culture, even though there are barely any Chinese actually seen in the series or movie. When the Chinese ARE see n, it's as bar girls and coolies. Most of the show is done in modern English with occasional Chinese loan words or Chinglish phrases. One interesting point, however, is the reference to Shan Yu, a warlord-philosopher apparently in the tradition of Fu Manchu, Shiwan Khan or Genghis Khan, whose writing is remembered centuries later with an orientalist cadence: ""Live with a man 40 years. Share his house, his meals. Speak on every subject. Then tie him up, and hold him over the volcano's edge. And on that day, you will finally meet the man."

Overall, the Firefly show subconsciously raised the interesting question: given that we are watching this world unfold from the viewpoint of the outlaws/mercenaries, should we read their use of English to represent an act of subversive rebellion, where they lapse into Chinese only when absolutely necessary? Of course, if this were the case, they would surely use formal Queen's English or a closer semblance to that, I suppose. One might consider the world of Star Wars where everyone in the Empire speaks Queen's English with no slang or casual vernacular. On the other hand, the Rebel Alliance is filled with people who can make out the language of Wookies, Sullustans, Rodians, and Jawas without protocol droids. Ewoks and Hutts, not so much, for some reason.

So, knowing that, what future directions might we take with dystopian languages that haven't been fully explored yet? What happens IF a rebellion succeeds. Does everyone then go back to using the former dominant language, or does the rebel dialect take over? Many options could play out.

But what are some other thoughts or notable examples to add?