This year marks the 25th anniversary since the death of Konerak Sinthasomphone, a 14-year old boy killed by Milwaukee serial killer Jeffrey Dahmer.

Having spent my summers in Milwaukee as a young boy myself, the case always touches me. His family had fled Laos in the aftermath of the Laotian Civil War, arriving in the United States in 1979 in a desperate bid to rebuild their lives. 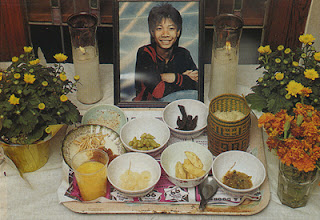 On May 27, 1991, two Milwaukee police officers responded to a call that night from two African-American women, Sandra Smith and Nicole Childress. The women had found a 14-year-old Laotian-American Konerak Sinthasomphone in the street drugged and bleeding.

The officers found the women protecting the boy from 31-year-old Jeffrey Dahmer. Dahmer insisted he be allowed to take the boy home with him. The officers decided to release the boy to Dahmer. The women protested, and were threatened with arrest by the officers, who returned Konerak Sinthasomphone back to Dahmer's apartment. Dahmer would later explain that he murdered the boy only moments after the police left. His body would be found later in July, 1991.

He would have been 39 this year.

I often wonder how different things would have been if our interactions, our relationships between communities of color, refugees, and the police, and the trust we built between each other had been stronger.