Creatures of Myth and Legend 2008 Roundup.

In the spirit of Halloween, Filipino American Heritage Month and National Humanities Month, it seems appropriate to offer a selection of mythological and rumored creatures for consideration besides the usual angsty Eurotrash vampires, werewolves, mummies and zombies who've all about outstayed their welcome in the public consciousness for now, as well as creepy long-haired Japanese ghosts. 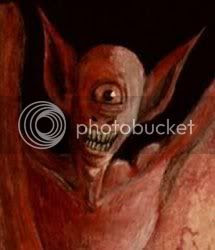 From Tanzania, we have the Popobawa of the island of Pemba. First identified in the 1970s, he can be identified by his odor, and is a one-eyed flying ogre with a giant penis and a penchant for buggery. He attacks only men, for up to an hour. Seriously, I'm not making this up: http://en.wikipedia.org/wiki/Popo_Bawa

From the Philippines, the Manananggal is beautiful older woman, and one of the more repellent types of Aswang. One with leathery wings and a detachable torso that flies away legless. Manananggals are reported near the Visayan islands. They feed on pregnant women, using a proboscii to suck out the hearts of fetuses. Legends also say manananggals reproduce by spitting a black chick into another person's mouth.

The Tiyanak is a Phillipine creature that imitates a child, usually a newborn baby who cries in the jungle to attract unwary travelers. Once it is picked up by someone, it reverts to its true form and attacks. Aside from slashing people, the tianak love leading travelers astray, or in kidnapping children. Some say it is the spirit of a baby whose mother died before childbirth. You can apparently counter a Tiyanak by turning your clothes inside out. The tianak finds the method humorous enough to let you go and leave you alone.

The Bakunawa is a Filipino deity depicted as a serpentine creature with two sets of wings, whiskers, a red tongue, and a mouth ‘the size of a lake.’ Bakunawa lived in the sea at a time when the world had seven moons.  Being fascinated by their light, it would rise out of the sky into the sky and consume the moons. Thus, they were the cause of eclipses. To prevent the world from becoming dark, the people would run out of their homes, taking their pots and pans, to make the most noise they could in order to scare the Bakunawa so they would stop eating the moons and give them the moonlight back.

The Tikbalang is another Filipino creature that lurks in the mountains and forests. A tall, bony humanoid with limbs so long that its knees reach above its head when it sits down. It has the head and feet of an animal, usually a horse. It may be a transformation of an aborted fetus which has arrived on earth from limbo. The Tikbalang apparently enjoys slapping people, or hoof-stomping its poor victim while smoking a huge cigar. All sources agree that the Tikbalang can perfectly mimic the appearance of people familiar to you, and this transformation is heralded by the strong smell of tobacco.

But not all of the fun creatures come from Asia and the Pacific. Here's one from Europe. 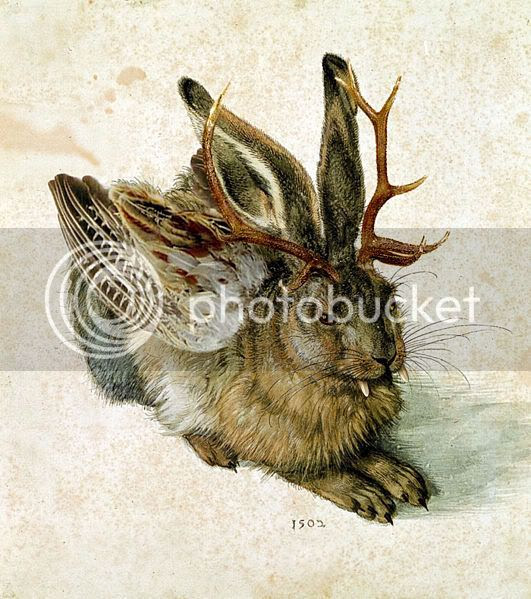 The wolpertinger of Bavaria's Black Forest is a bunny that sports roebuck antlers,  jay wings, duck feet and fangs. It's obliquely related to the American Jackalope.
One of the few Asian reptilian mythological creatures that's consistently malevolent is the Yilbegän. This reptilian dragon is identified in the myths of two Siberian cultures – the Turkic peoples and the Siberian Tatars – as a polycephalous monster. In some legends it takes the form of a winged serpentine creature but in others it is a leviathan who rides an ox with 99 horns.
In Russia, we find Chuvash dragons, from Chuvashia, naturally. These dragons are winged fire-breathing sorts and shapeshift from dragon to human (and vice versa). The legends say the ancestors of the Chuvashians found a giant snake, which theydecided to kill,  but the snake pleaded for peace and was given wings by Allah – which is how the creature came to fly. Chuvash dragons can be polycephalous. The most famous is one called Veri Celen (literally, ‘fire snake’ in Chuvash) who was able to take human form in order to visit men and women in the night and sleep with them.
In Korea, we find the Imoogi. Depending on your source, Imoogi are immature dragons that must live for 1000 years before becoming a dragon or else cursed, hornless beings unable to become fully-fledged dragons.
We'll add more creatures soon. But this is a start on breaking away from the 'usual suspects' of horror! In the meantime, here's a scene that may or may not have been inspired by the legend of the Wolpertinger. ;)