Dating back to 1763, Filipinos established their first permanent settlement in North America near New Orleans. Since then, Filipinos have migrated across the country settling mainly in Hawaii and California, and metropolitan areas such as Chicago, Houston, Las Vegas, Phoenix, Washington, D.C. and Seattle. In 2007, the Filipino American community was estimated to be at 4 million, or 1.5% of the United States population.

With that in mind, it seems appropriate to take time to note the passing this year of Robert Aspirin, a Filipino-Irish American science fiction and fantasy author who was born in Michigan and raised in Ann Arbor (where I spent much of my formative years in the 1980s) and the author of the Myth Adventures and Thieves' World series, among numerous other projects. 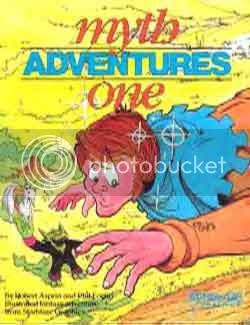 His work with Phil Foglio was a deep influence on me, and I'm sorry I never got to meet him in person. But that's how the arts are, sometimes, you get only fleeting meetings with the creators, but the work leaves you changed over a lifetime.

Of course, this is also a good time to give a quick shout out to my good colleagues Barbara Jane Reyes, Anthem Selgado, Patrick Rosal, Marlin Esguerra, Dr. Penelope Flores, Marlon Unas Esguerra and many others who've helped me in one way or another on my journey as a writer. Keep energized, keep creative!