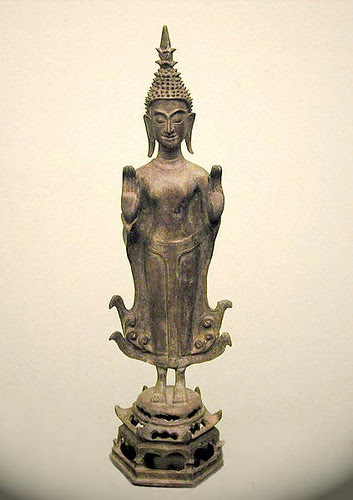 There's often a stereotype that if you've seen one Buddha statue, especially in Southeast Asia, you've seen them all, and that there's a rigid uniformity to their construction and how to properly depict the Buddha.

Because they're so rarely seen, or else seen among Buddha statues from other cultures, many Lao and non-Lao have trouble seeing the distinctive styles characteristic of authentic Lao / Lan Xang representations of the Buddha. Hopefully, this will help provide a reference point.

Above, we have an excellent example of an 18-19th century Lao Buddha. This is notable for the significant dynamic energy in the position and stylized motifs, typified by the use of spiky, curling points and the expression on the Buddha's face. He was 15 inches high and had a very elaborate base and finial. He was sold for $2,000 and is currently believed to be in the hands of a private collector. It is uncertain if and when he will ever be seen in public again.

There is unfortunately little public documentation of the history of this piece, such as its original owners, its creator or where it had originally been displayed, what it was made of, and how much it cost, for example. This was one of many hazards of the war and colonization.