The Science Fiction Poetry Association recently announced the 2014 winners of the Rhysling Awards for the speculative poems of the year in the two traditional categories of Short Poems and Long Poems. The ceremony was convened at Goddess and the Moon in Nashville, Tennessee on Friday, December 12th. This year's chair was Elizabeth R. McClellan.

Poems were nominated from over 49 publications this year. The Science Fiction Poetry Association was founded in 1978 to bring together poets and readers interested in science-fiction poetry. It has over 300 members internationally. The active membership in good standing nominates and votes on the Rhysling winners each year.

The Rhysling winners are regularly reprinted in the Nebula Awards Anthology from the Science Fiction and Fantasy Writers of America, Inc., and are considered in the SF/F/H/Spec. field to be the equivalent in poetry of the awards given for "prose" work— achievement awards given to poets by the writing peers of their own field of literature.

The cover for this year's anthology comes courtesy of Francis Reddy, courtesy of the StarChild project, a service of the High Energy Astrophysics Science Archive Research Center (HEASARC), within the Astrophysics Science Division (ASD) at the National Aeronautics and Space Administration (NASA) Goddard Space Flight Center. The artist’s rendering is a conceptual image of the dwarf planet Eris and its only known moon, Dysnomia. 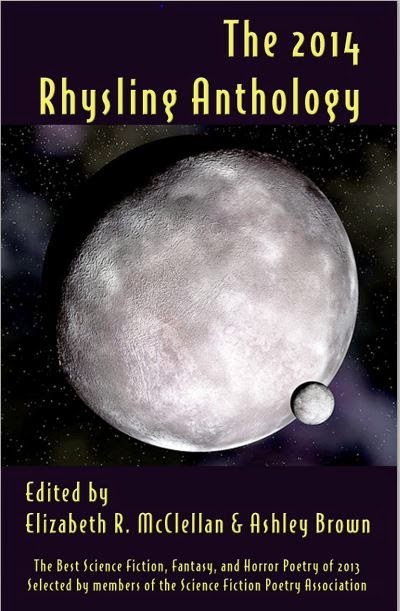 Third Place
“I will show you a single treasure from the treasures of Shah Niyaz” by Rose Lemberg
Goblin Fruit, Summer 2013