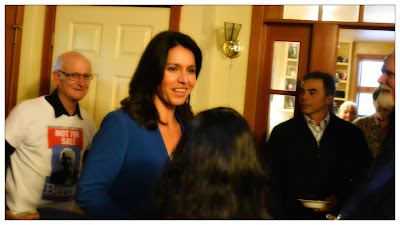 Representative Tulsi Gabbard from Hawaii was in Ukiah, California on May 7th to meet with community members in the Northern California region. She attended a gathering of over 400 people at the Ukiah Conference Center in the afternoon, and met with supporters later that night. Elected in 2012, she is the first American Samoan and the first Hindu member of the United States Congress. 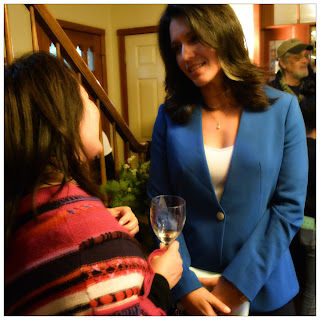 She encouraged civic engagement, participation in the democratic process, and stressed the importance of voting. She spoke from her personal experience as a veteran of the war in Iraq, and what she had seen in her home state of Hawaii and the issues that have been presented to her in Congress. 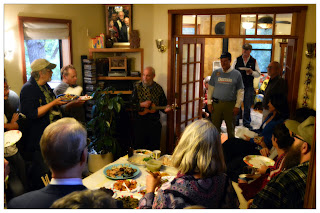 She particularly spoke of her support of Bernie Sanders, and touched on veterans issues, such as the ongoing dilemma of veteran suicides, among many others in the course of her inspiring talk. Representative Gabbard also did an interview with Radio Curious that will be online soon. 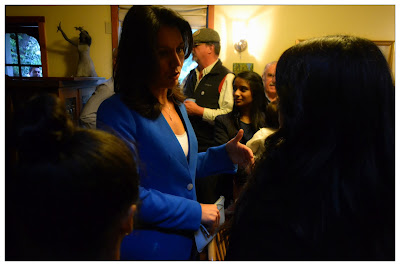 I was deeply impressed by her knowledge and principles, and I am certain we'll be seeing much more of her in the years ahead. She brings a valuable range of experience and perspective to the American political process. She's a refreshing and inspiring role model for any of us encouraging our community youth to get involved in our democracy. She took the time to hear all of us on any number of issues, and more than a few hoped Bernie Sanders would consider her as a vice-presidential candidate.

After speaking with her, I find myself assured that Bernie Sanders would approach foreign policy with a needed mindset averse to inffective, protracted wars to create "regime change," and that he does have the concerns of veterans close to heart.

I spoke with her briefly about the need for ongoing support to address the issue of unexploded ordnance in Southeast Asia, such as in Laos, Vietnam, and Cambodia, and how we might address future crisis zones around the rest of the world. If she ever ran for office in a state I lived in, she would certainly have my unconditional support. 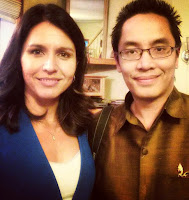 Definitely a fine meeting, and I appreciate all of the organizers who helped to put this together.