Art in progress: The Nakanya 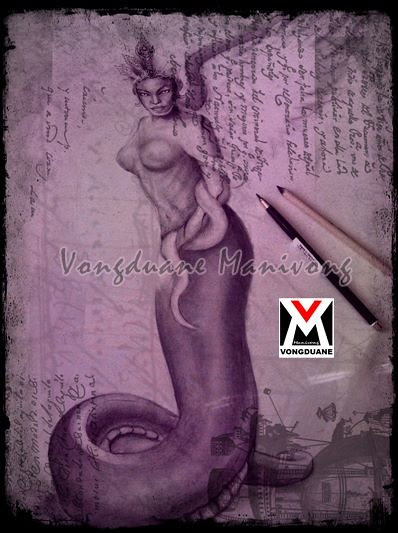 Vongduane Manivong presented some preliminary art for the Nakanya who will appear in my new book, DEMONSTRA coming in April, 2013 from Innsmouth Free Press. This isn't the final, but I hope it gives you some sense of where we're taking the book. We're very excited about this project.

This was funded in part by your support through our kickstarter at http://www.kickstarter.com/projects/1064450543/demonstra-lao-american-art-and-poetry which is entering its last two weeks.

We hope to raise additional funds during this time to commission the last 8 beings we wanted to present for this project, namely the Weretiger, Mae Thorani,  Phi Kowpoon, the noodle-selling girl ghost, the flying steed Manikab,  the Kinnon,  the Toad King Khankak,  Phi Kongkoi, the hungry ghost, and the Chameleon Prince Khangkham.

For those of you who are curious, one of the prominent mentions of the Nakanya is regarding the eight-year-old daughter of Sagara, one of the eight great nak kings said to dwell in a palace at the bottom of the sea.

According to the "Devadatta" chapter of the Lotus Sutra, the nakanya conceived the desire for enlightenment when she heard the Bodhisattva Manjusri preach the Lotus Sutra in the nak king's palace. It's notable that this led into an argument between her and the disciple Shariputra, who insisted a woman cannot attain nirvana. She put him in his place faster than a human can blink, and opened the way for women across the universe, according to tradition.

Unfortunately, European and American translators often refer to such beings as 'dragon princesses' which really doesn't do them justice. It's not really any more an accurate term than calling Medusa a hag or a witch, or a basilisk a dragon. Is a Zaj a Naga or a Nak, a Lung or a Ryu? Some may think we should consider the terms interchangeable, but I would disagree.