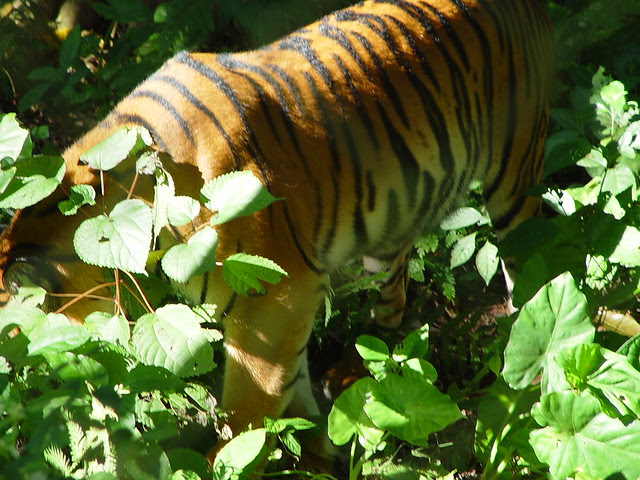 We just cleared the funds needed to commission a depiction of a Lao weretiger or man-tiger for my new book, DEMONSTRA coming out in 2013. But what's the deal with weretigers?

Of significant interest are the beliefs among several of the Lao Soung tribes in the mountains of Laos. Weretigers are common supernatural concerns in this area.

In "Peoples of the Golden Triangle," Paul and Elaine Lewis noted the Akha erect a gate with protective wooden figures to “protect the village from hawks and wildcats, leopards and tigers, illness and plague, leprosy and epilepsy, vampires and weretigers, and all other bad and wicked things’. (Lewis, p. 224)

Lewis also examined Lisu beliefs. The Lisu historically have believed weretigers (phi pheu) and 'vampires' (phu seu) were capable of possessing others, and that family members of the possessed were capable of becoming possessed as well. This affected courtship practices, including Lisu youth wishing to avoid courting people who came from villages where someone had been possessed by a weretiger. (Lewis, 260.)

A particularly distinctive belief among the Lisu is that “Sometimes a possessed person causes the essence of the weretiger to go into some valuable object, such as a silver ornament or a piece of fine fabric, and leaves it lying on a path. Anyone who picks up that object will in turn be possessed by the weretiger.” (Lewis, 260.)

Lewis further noted that to Lisu, “A person possessed by a vampire (phu seu) takes the shape of a cat, a dog, or some other animal, and goes around biting and sucking the blood of people and animals, both the living and the newly dead. On the morning after a Lisu corpse has been buried someone goes to the grave and shoots a gun over it, and the tells the deceased, ‘the vampire is dead’. Lisu believe that if there is a vampire in a village many children will die.” (Lewis, 260) This has had an effect on the way they engage with doctors and physicians. “In the past Lisu were not willing to take their sick to hospitals, fearing that they might be bitten by ‘vampires’, for they believe wherever many people are sick and dying, vampires must be present.” (Lewis, 266)

Another community examined were the Lahu. There are approximately 10,000 Lahu in Laos. Lahu believe in spirits known collectively as ne. Some are beneficial or neutral, but some are vicious and known to attack others if they are offended. “Spirits capable of invading people are greatly feared. When possession takes place, they must be exorcised.” (Lewis, 192) Lewis notes that ‘Lahu are very concerned about weretigers (taw) trying to get to the corpse. If they hear mysterious noises, or see many insects near the grave soon after the burial, they fear that a weretiger may be lurking about. Relatives sometimes wait by the grave with machete in hand ready to attack any weretiger which might try to molest the body.” (Lewis, 192)

The Mien cosmology is a unique blend of Taoism learned over five hundred years ago that also integrates animist beliefs in the spirits and ancestors. Mien recognize the spirits as “beings who live in a world opposite to that of people; they work at night, while humans work in the day; they are stupid while people are clever; and they are strong, while humans are weak.” (Lewis, 156-157) Mien have a society of priests and shamans. Lesser priests “deal only with the ‘small spirits under the sky’, the evil and often malicious spirits which need to be controlled in order to avoid sickness and misfortune.” (Lewis, 161)

More remains to be studied.