From a comics point of view, I'll look back on 2006 as a year marked with some real gems, but sadly most of them also ended, were one-shots or are ending. The Losers and The Punisher: Tyger are two particular examples that come to mind, but the one I'll really be sad to see going is Nextwave: Agents of H.A.T.E.

Written by Warren Ellis, it's a hilarious respite from comics who have been taking themselves way too seriously, bludgeoning us with irritating year-long cross-over mega-maxi-events aping the Crisis on Infinite Earths. (Civil War and 52 can end any minute now, thank you...)

Nextwave is absurd and refreshing with great characters and stories told in two-issue arcs. The recently released hardcover collects the first 6 issues and is a great introduction to the series.

Ellis described Nextwave as "an absolute distillation of the superhero genre. No plot lines, characters, emotions, nothing whatsoever. It’s people posing in the street for no good reason. It is people getting kicked, and then exploding. It is a pure comic book, and I will fight anyone who says otherwise. And afterwards, they will explode."

And you know what, it works. I'd especially recommend it for those who grew up reading comics during the 1980s and 90s. Check it out. 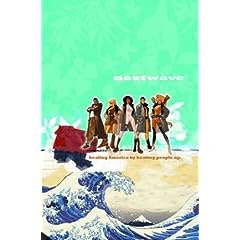