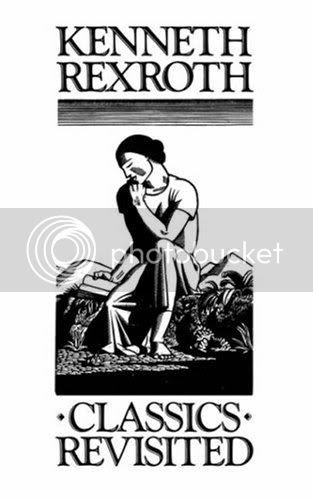 Rummaging about this weekend, I found my old copy of Kenneth Rexroth's Classics Revisted, which I would always strongly advise both emerging and experienced writers. I encourage you to look at for an intriguing approach to viewing what Rexroth refers to as the "basic documents in history of the human imagination." He provides a series of short, typically 5-page essays on classic texts that provide an excellent starting point for an alternate but still interesting consideration.

Particularly as we look at the work of current writers who are in the process of creating mashups, alternate histories, authorized sequels for books by other people, etcetera, I found myself even more appreciative of Rexroth's quest. A great problem with many of these modern 'texts' is that they are not being written with the intention of providing a very deep and interesting experience for all of their transmutations and literary alchemy. Most are mere stunts, which are not necessarily bad things, but their transformative effect on readers can often be dubious.

I am not necessarily saying the solutions will be found strictly within the pages of Rexroth's work, but I think a great many of us, especially within speculative literature, would do well to refamiliarize ourselves fully with the classics and why they resonate across the centuries.

For Lao steampunk writers, even as we talk of the future that never was, are we also addressing the universal human issues in ways that allow us to see past, present and future in innovative ways with a deep literary core firmly fastened to it? What will it mean to do so?

Over recent centuries, Lao literature has become increasingly clipped and known for its brevity, compared to the epic forms of old that used to take several nights to recite. This brevity does not necessarily constitute a handicap, but it would if we do not maintain a firm sight on the aims of literature over chatter.

But take a look at Classics Revisited if you get the opportunity and let me know what you think, and what resonates with you.

Many of Rexroth's Classics Revisited essays, as well as his poems, translations and other writings, are online at http://www.bopsecrets.org/rexroth