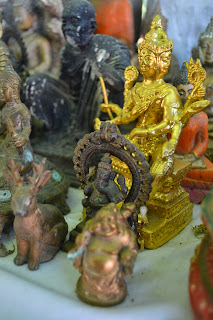 My poem "5 Flavors" has officially debuted at Expanded Horizons this week, along with "Molting Season" by the poet Anne Carly Abad, who writes poetry and stories when she’s not training Muay Thai. Her story, ‘Sage’s Reckoning’ recently earned an honorable mention in Q3 of The Writers of the Future Contest (2013). Her work has appeared or will appear in Magma Poetry, Dreams & Nightmares, and Strange Horizons. Find out more about her at the-sword-that-speaks.blogspot.com.

Additionally, the short stories "Swallowing Saturday" by Catherine Batac Walder and "Daughters of the Air" by Gail Labovitz are included in this issue.

Maria Mitchell also provides a great interpretation of my poem "The Robo Sutra" that appeared earlier this year at Expanded Horizons. A writer and illustrator, she wrote the short stories "The Mermaid Promise" at Flashes in the Dark, "Song of the Catherine Clark" in Cthulhurotica, "The Kadath Angle" in Future Lovecraft and "Second Coming" at Dead Man’s Tome. Her poems have been published in the gothic anthology Candle in the Attic Window, The Absent Willow Review, Yester Year Fiction, Sage Woman #80 and the horror anthology Ugly Babies Vol. 1. She illustrated her poem, "The Last Son of Circe," in Ugly Babies Vol. 1 and is the columnist of Slicing Score at Innsmouth Free Press. My poem, "The Robo Sutra," is the first poem by another writer Maria has illustrated, so I'm honored by that. She’s also an affiliate member of the Horror Writers Association.

Because I think it can be handy for poets to give a little behind the scenes glimpse at their poems:

"5 Flavors" is a meditation on the phi of Laos, much in the same vein as "No Such Phi" forthcoming in Lakeside Circus later this month. This particular poem also takes into consideration the classical Lao principles of cooking, and five key flavors that a chef endeavors to balance and experiment with: Sweet, sour, spicy, bitter, and salty. These principles are also found throughout other parts of Southeast Asian cuisine.

The poem originally came up from a question over why so many Southeast Asian ghosts and spirits seem determined to take it up a notch from Western ghosts. When you compare mythologies, it seems the spirits of the region are far more likely to try and eat you than those in the U.S. or Europe. There, you have banshees, poltergeists, and largely intangible entities who linger. They may scream, they may throw things around, they may try to frighten you, but eating you in part or in whole is a pretty rare occurrence. On the other hand, in Laos and Southeast Asia, you're relieved if banging things around is the worst they do.

As I did my research for my book DEMONSTRA from Innsmouth Free Press, there were an interesting number of phi who were considered female spirits, and whose particular modus operandi involved food, viscera, consumption, etcetera. And so, "5 Flavors" began to coalesce into its present form you see at Expanded Horizons. 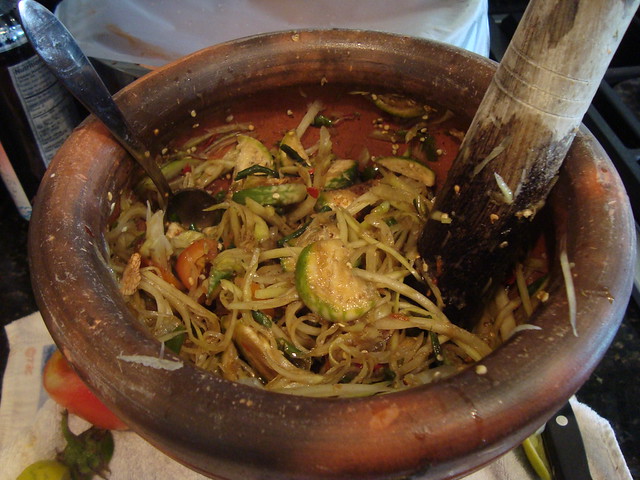 "5 Flavors" takes place at an actual Lao restaurant in Sacramento, the Sabaidee Thai Grille, which is tucked away on 8055 Elk Grove-Florin Road. If you get a chance to, stop by and see the owners. They have a particularly extensive collection of contemporary artwork by the Lao American artist Sompaseuth Chounlanmany, who is also from Vientiane, where both the artist Vongduane Manivong and I were born.

"5 Flavors" also makes reference to the traditional Lao buddhist rite of Boun Khao Padab Din. Observed in September, the festival comes from a belief that the guardians of Hell (Nalok) let the souls of at least the human dead to return to earth for a day. They're famished, so the living are obliged to lay packets of hot rice wrapped in bamboo leaves. The spirits, however, can only eat the vapors. They then proceed to visit various family members and friends until they're called back to the underworld. For some families who lost a relative in the previous year, remains are often exhumed, cleansed then cremated, with gifts presented to the monks who chanted the funerary rites for the deceased. A relatively readable scholarly article on the subject can be found in Patrice Ladwig's "Feeding the dead: ghosts, materiality and merit in a Lao Buddhist festival for the deceased."

But take a look, and see what you think.