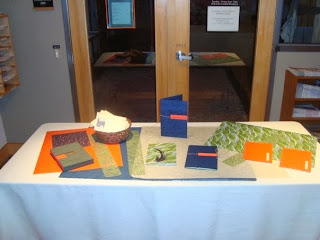 This week, December 13th, 2013 marks the 5th year since the release of Winter Ink, the 20th Winter Book from the Minnesota Center for Book Arts. It's very rare to find a copy today, because as a hand-crafted art book, it was produced in a very limited edition.

Under the direction of MCBA Artistic Director Jeff Rathermel, three editions of Winter Ink were produced, each letterpress printed by award-winning master printer Paulette Myers-Rich with assistance by numerous artists, interns and volunteers. The text was set in Optima. The Chapbook edition sold for $30, the Standard edition sold for $150, and the Deluxe edition sold for $475.

There were only 26 copies of the Deluxe Edition. I signed all of them. This edition was designed and bound by the amazing Jana Pullman. It is composed of letterpress printed text and imagery on kozo paper with French folded pages bound in green silk and presented in a threefold wrap around case covered in poppy Asahi book cloth. 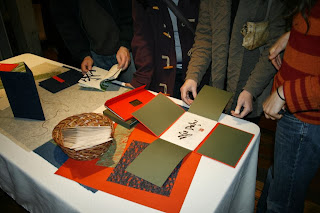 I recently updated my friends and colleagues about what has happened since we last left off in December, 2008. Back then, I had just been informed that I was the very first Lao American to receive an NEA Fellowship in Literature for my poetry. This was followed up by my subsequent receipt of a 2009 Asian Pacific American Leadership Award in the Arts from the state Council on Asian Pacific Minnesotans, as well as recognition from the Mayor and County of San Francisco during the first International Lao New Year. 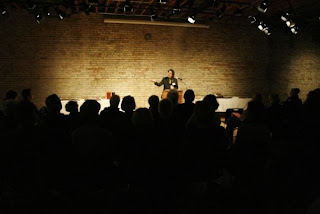 I and my colleagues Saymoukda Vongsay, Catzie Vilayphonh, and Chanida Phaengdara Potter convened the National Lao American Writers Summit in 2010, where we gathered over 100 Lao American writers and readers from across the country, many meeting for the first time in 40 years since the end of the civil war for Laos. Many had a chance to stop in to the Minnesota Center for Book Arts and were amazed and inspired by the exhibits there. 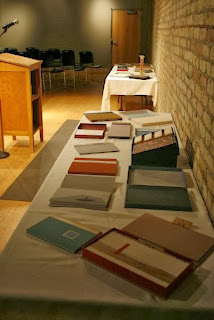 In 2011, I made a transition, splitting my time between Minnesota and California where I continued to do research on the Lao Diaspora, and to reconnect with my long-lost family members who were now living in Modesto. I also had my work in the media arts with Lao youth recognized by the University of Minnesota's Human Rights Center that year.

Significantly, in 2012, I was selected as a Cultural Olympian to represent the nation of Laos during the Poetry Parnassus convened during the London Summer Games. I also helped to establish Lao Minnesotan Artists Heritage Month, recognized by the Governor of Minnesota. My poems have since been translated into Spanish, French, German, Korean, Thai, Tagalog, Bengali, and Lao.

This year, in 2013, my work was included in the Smithsonian Institution's first exhibit on Asian Pacific Americans, "I Want the Wide American Earth," which has been showcased at the National American History Museum among other institutions. And, as many of you have seen, I am now also in the middle of releasing my latest book of poetry, DEMONSTRA, from Innsmouth Free Press. 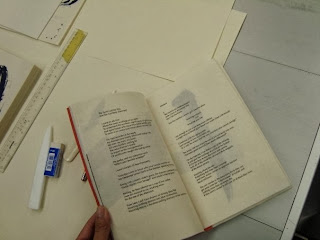 Among the poems that were included in the collection were some of my readers' favorites like "The Spirit Catches You and You Get Body Slammed," and "Wisdom," which appeared in Bamboo Among the Oaks. My personal favorite was the original poem "Ink: A Recipe," which was later reprinted in Hong Kong in 2012. This was the cover for the Standard Edition: 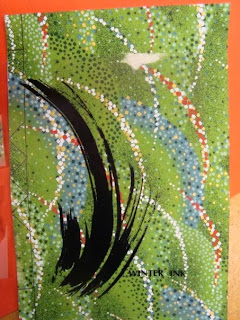 When I composed the poems for Winter Ink, I pondered the significance of words in the world, and how much we can change with even an inch of ink, no matter where we were.

There is something deeply powerful in the hand-crafted approach to creating books, one that I hope none of us ever lose sight of. As I often tell my students, we must all see that books are more than just ink upon a page, but souls talking to souls, each infinite in potential. 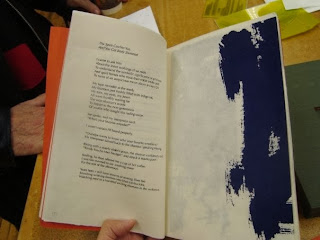 I feel blessed to have been a part of this wondrous undertaking, and I hope the members of the Minnesota Center for Book Arts and their many supporters will see that they make a very unique difference, shining light and opening doors for artists the world over.