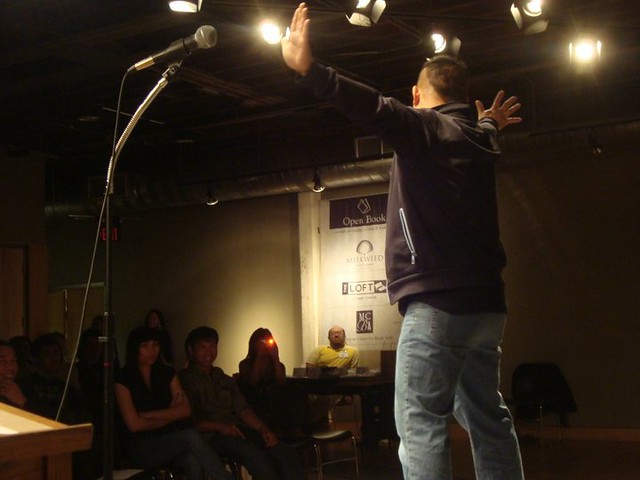 As a recap, a few people were under the mistaken impression that the Summit was something that was going to be held every year, but that was never really the plan. The Summits are convened when it makes sense. The larger idea was that it would be a pivotal free-form gathering where Lao artists and writers would meet, many for the first time in 40 years.

Is this an effective model? Let's consider the first one, which was convened at the famed Loft Literary Center in Minneapolis.

For those who attended, they were able to have unrestricted time to talk with writers like Oscar-nominated Thavisouk Phrasavath, who went on to win an Emmy literally days later, the first Lao to ever hold such a distinction.

People met Mali Kouanchao, the award-winning artist who had just received an Asian Pacific American Leadership Award and a prestigious Bush Artist Fellowship, and the artist Youme Nguyen Ly who wrote and illustrated the children's book, Mali Under the Night Sky, based upon Mali Kouanchao's childhood.

The musician Ketsana's song would soon reach an international audience as it was featured on Project Runway to highlight the final collection of Andy/Ari South. She would also become part of the 50th Anniversary SEA Games.


Participants trained with award-winning actor Ova Saopeng and Leilani Chan of TeAda Productions in Los Angeles who would bring their acclaimed play "Refugee Nation" to Minneapolis just a few weeks later. Spoken word training was led by Catzie Vilayphonh of Yellow Rage and Saymoukda Vongsay, who would go on to write the acclaimed play "Kung Fu Zombies vs. Cannibals."

Phayvanh Luekhamhan went on to become executive director of Montpelier Alive. She is the only Lao American who has ever been a Kundiman fellow. You had a chance to meet with Dr. Adisack Nhouyvanisvong, one of the founding members of the SatJaDham Lao Literary Project (first established in 1995) and his family. 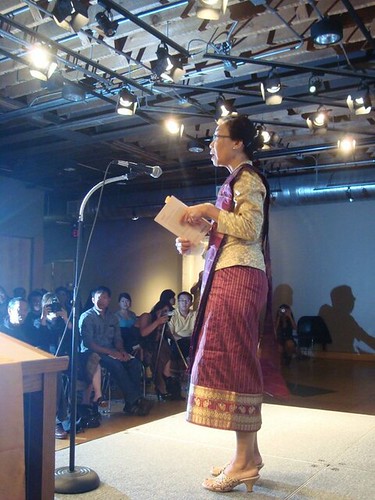 Bounheng Inversin, who translated Outhine Bounyavong's Phaeng Mae: Mother's Beloved, shared her advice, and later interpreted for Hillary Clinton in the first visit of a US Secretary of State to Laos in 57 years. Joy Panigabutra-Roberts is now the Head of Cataloging and Metadata at the American University in Cairo and her work has been featured in the Journal of Southeast Asian American Education and Advancement and Eye to the Telescope.

The Lao Minnesotan painters Aloun Phoulavan and Kinnary Phimpadubsee were there to share their experiences and hopes for the future. Thouni Seneyakone would go on to volunteer against human trafficking in Laos and Southeast Asia.

Mali Phonpadith went on to produce the show Tea with Mali and to promote her book A Million Fireflies. Viliya Ketavong went on to have her short story published in the anthology A Rainbow Feast, and became part of a historic cohort of Lao emerging playwrights in San Diego who had their work performed at the Old Globe Theater.

You also had a chance to meet Lori Phanachone, who made headlines in Iowa by standing against a ridiculous school policy. Participants met the organizers of the Lao Artists Festival of Elgin, Illinois, like Aloune Khotisene and Maniphone Khoxayao.

Chanida Phaengdara Potter went on to found Little Laos on the Prairie with Danny Khotsombath, and it is regularly spotlighted at the Twin Cities Daily Planet. Many of our volunteers became part of the first Lao Leadership Institute cohort, and many of volunteers eventually became president or officers of the Lao Student Association. 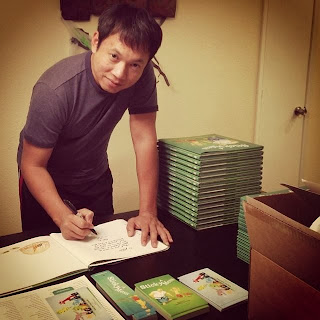 Nor Sanavongsay went on to publish his first children's book, Xieng Mieng: A Sticky Mess! after 14 years in development. I went on to the London Summer Games as a Cultural Olympian and my work is currently part of the Smithsonian's first traveling exhibit on Asian Americans.

Personally, I'm happy to see how much our writers and artists have accomplished over the last 3 years, going on four. I think the results have been diverse and breathtaking. And I think it can also be said that this last gathering really helped to strengthen many of our relationships to one another and to see the many different ways one could be a Lao writer in the world.

In all, the National Lao American Writers Summit cost just a little over $13,000 for three days, including $10,000 from the Minnesota Legacy fund. But I hope this demonstrates the international breadth and reach these funds are capable of enabling within just 3 years. We learned a lot from this process, and we hope that many others will have similar opportunities in the decades to come.

As we approach the 40th year of the modern Lao diaspora, a good case can be made that another convening is in order. But what do we want to see happen within such a gathering of Lao from across the country?