Troubling Borders: An Anthology of Art and Literature by Southeast Asian Women in the Diaspora

Troubling Borders is out. An anthology that showcases creative writing and visual artworks by sixty-two women of Southeast Asian descent. Edited by Isabelle Thuy Pealud, Lan Duong, Mariam B. Lam and Kathy L. Nguyen, the collection features "compelling storytelling that troubles the borders of categorization and reflects the multilayered experience of Southeast Asian women."

Will this be a collection that goes the way of Tilting the Continent, The Big Aieee! or Charlie Chan is Dead? Bamboo Among the Oaks or How Do I Begin? As we get closer to 2015, there are a lot of expectations for this anthology. In a nice break from most Asian American anthologies, several Lao writers were included.

I haven't had a chance to look at a copy of the book, but I value the principles driving its creation. At $50 for a hardcover, but one with full-color illustrations, it has the work of several of my favorite writers and artists, but I am afraid it might also put the book out of the reach of many of our most vulnerable readers.

At that price point, it's not a casual decision to bring it into your house. Considering the significant number of Southeast Asians who live below the poverty line, and others for whom bringing in a book of art and writing is a relatively new experience, it will be interesting to see how this book does. 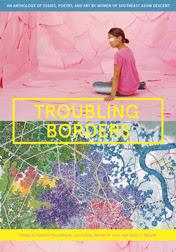 Personally, among the writers I'd keep an eye out for are the pieces by Phayvanh Leukhamhan and Souvankham Thammavongsa, Barbara Jane Reyes, and Davorn Sisavath. It look like there are many other excellent writers and artists to discover in the collection when you review the Table of Contents. I hope to find there are writers and artists from more historically underserved communities such as the Akha, Karen, Montagnards, Lahu, Lisu, Tai Dam, Mien and Khmu, to name a few. It would be particularly interesting to hear from those who are coming from "non-traditional" experiences we've been encouraged to expect from Southeast Asians in diaspora, such as those who are living with disabilities, religious and political minorities, or the GLBTQ community. .

It's never an easy thing to put together an anthology, and there are so many different directions one can take, as well as so many constraints, which haven't necessarily been solved by the rise of digital technology. As we approach 40 years since the major Southeast Asian diasporas began, this book comes at a timely point, but there are also so many more discussions we need to be having.

With the publisher being the U of Washington, I'm certain the academic libraries and large public libraries will buy this, especially if there is a large population of Southeast Asians in the surrounding community.
I do hope they issue a less expensive paperback version, though, for the reasons you cited.

Because the publisher is the U of Washington, many academic and large public libraries will add this to their collections, especially if the surrounding communities have a large Southeast Asian population. I do hope, that they pub out a less expensive paperback edition, though, for the reasons you cited.