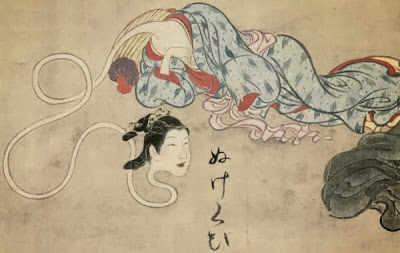 Here we have Sawaki Suushi's 1737 image of a Rokurokubi, one of the classic spirits of Japan notable for their long necks in the most common version, although another has a head that can detach and fly around. Unlike the Phi Kasu, of Laos a Rokurokubi's viscera and entrails do not typically fly with her head. The ability of the Rokurokubi to elongate their necks brings to mind the imagery of the ghost Nang Nak when she elongated her arms to reach for through the floor of her home to retrieve a piece of lime she dropped while cooking.

Some scholars feel the legend came to Japan from overseas during the Muromachi period (1300s-1500s) as a result of traders doing business in Southeast Asia and southern China, or around the height of Lan Xang. In China they were referred to as the Rakuto or Hitoban. The Rokurokubi whose necks elongate are a newer legend. But it would be interesting to see what would happen if these spirits came to visit Laos after so many centuries.

One era such exchanges might plausibly take place would be during World War 2, following the Japanese occupation of Laos in 1945.

There are Hmong anecdotes of watching Japanese units, informed of the surrender of Japan, committing suicide by placing grenades under their hats after pulling the pins. Most likely it would have been a Type 97 grenade, 九七式手榴弾 or Kyūnana-shiki Teryūdan, like this one: 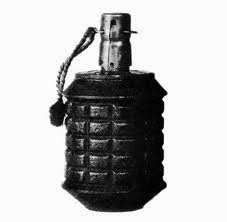 Until recently, Japan was one of the largest contributors of foreign aid to Laos, and there any number of possibilities how a yokai from Japan might have traveled to Laos. The question is, how would they interact, if at all, with the local phi, and would it be different from their interactions with the Hmong dab, and other entities reputed to inhabit the highlands or who have yet to be discovered.

It's an interesting scenario for writers to consider.