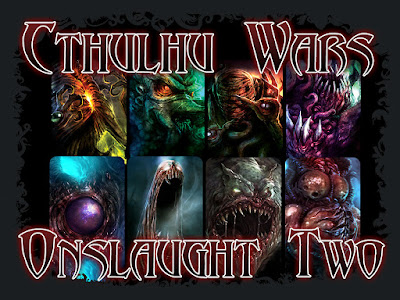 Sandy Petersen's new Cthulhu Wars Kickstarter had an amazing start, funding in less than half an hour. 3 weeks remain for Onslaught 2 to unlock several stretch goals and to enable Sandy Petersen and his colleagues to get a good reprinting of this classic game. We're seeing new pledge levels and stretch goals added regularly. 19 stretch goals have been unlocked so far, including 2 free large glow-in-the-dark minis. For those of us who backed at the De Vermis Mysteriis level during the first round, it's nice that the follow-up outlay will only be $150. I'm tempted by the 6-8 player maps, but I'll see as we get closer to the end of the campaign.

While I'm disappointed that Richard Luong isn't the lead artist on this set, the miniatures revealed thus far look like they will still be reasonably close in style that it won't be excessively jarring, although the Y'Golonac could use some reworking before the final molds are set, in my opinion. 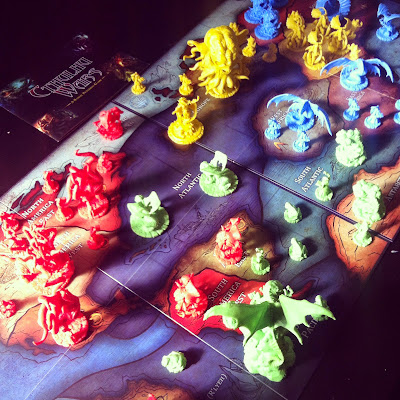 Take a peek and consider backing it! As so many others have shown in their posts, this is a magnificent and fast-paced game with very interesting angles, non-Euclidian and otherwise, for strategic play but without geting bogged down in minutiae and micromanaging like Axis & Allies or Monopoly. I think it will be decades before a better board game centered on the Cthulhu mythos emerges now, in terms of overall quality, ease and diversity of play.