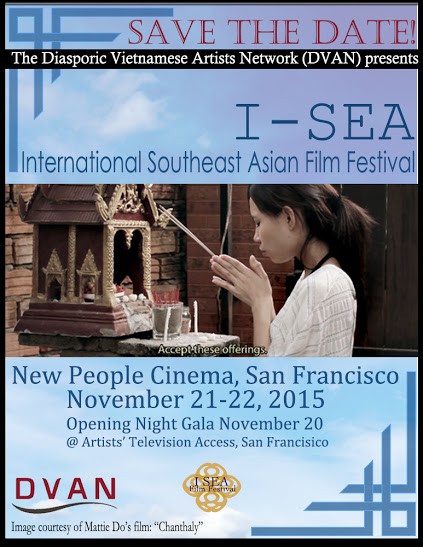 In November, I'll be presenting briefly at the I-SEA FILM FESTIVAL, which also includes some amazing films from Laos, Vietnam, Cambodia and elsewhere. Be sure to mark your calendars! As the organizers note:

The I-SEA Film Fest (International Southeast Asian Film Fest, Nov 21-22, 2015) highlights the histories, imaginaries and identities of those with ties to Southeast Asia and its diasporas. This year is the fortieth anniversary of US military engagements in Southeast Asia: the selected films seeks dialogue with local and international communities, drawing connections between wars then and now, overseas and on our streets. The films (9 features and 22 shorts) also query--and queers--standard national narratives of modern love, sexualities, and modernization.

The Opening night gala will take place on November 20th at Artist Television Access. The festival takes place at New People Cinema in Japantown from November 21-22nd, 2015--select screenings will have post-screening Q&A with filmmakers and panels. The I-SEA Film Fest is founded by the Diasporic Vietnamese Artist Network.

California is the home to the largest concentrations of Southeast Asian immigrants in the world. There are hundred of thousands of people of Southeast Asian descent in the United States, Canada, Europe, Australia, and other parts of the world. Southeast Asians are both invisible and hypervisible (as model minorities, gangsters, eternal foreigners) in North American mass media. These incredibly diverse Southeast Asian communities voice the ruptures--and re-envision global realities--forged by colonization, militarization and migrations. Providing counter-points to (hetero-)normative ideologies historically constructed by the West and by Southeast Asian nation-states, our Southeast Asian stories are varied and vital.