Well, it's either going to be your cup of tea or it isn't. From 2012, there's a write up of Mekong Hotel at Reverseshot: "Set along the Mekong River, which marks the border between Thailand and Laos, the latest film from Apichatpong “Joe” Weerasethakul is a vaporous film that’s a borderline in and of itself. Existing on a thin, delicately walked bridge between past and present, comic horror and realist drama, drifting lyricism and harsh atonality, Mekong Hotel is an hour-long avant-garde film..." 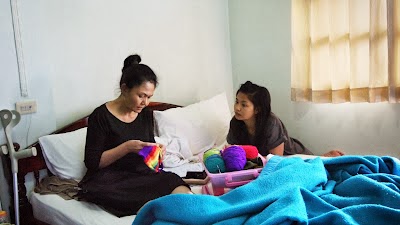 Unfortunately, it sounds much like Uncle Boonmee Who Could Recall His Past Lives, a film that I dearly wanted to like. But, in the end, I found Uncle Boonmee ultimately plodding and tedious, despite some great moments and intriguing concepts. It takes a lot of talent to make an artistic movie about a Phi Pob boring, but it sounds like Weerasethakul has pulled it off.  Here's an excerpt.

As someone who enjoyed Prospero's Books, Wings of Desire, and a great many other arthouse films, I'm not asking for Poltergeist or SAW. But there's a way to be artful, to say something, to create experiences with a ghost film in the vein of Ju-On, Shutter,  The Conjuring, or Drag Me Back To Hell. To create a horror film that pushes our buttons with a coherent narrative, not serve as a soporific.