Unlife on the Highway: An interview with G.O. Clark

By his account, G.O. Clark's first speculative poem was published in 1988, in the Magazine of Speculative Poetry, and then four years later, he would be published in Star*Line, a publication of the Science Fiction Poetry Association. After that, he became a more prolific writer of speculative poetry, including 9 books of poetry and a short story collection. 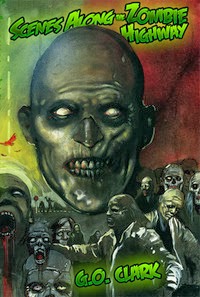 In 2013, his latest collection came out, entitled Scenes Along the Zombie Highway (Dark Regions Press), which blends Clark's offbeat humor and panache with the undead. This particular journey transpires over the course of 42 poems and 64 pages. Illustrations were provided by Marge Simon that complemented Clark's verse well.

Among his poems I had a few good laughs from were "Some Zombies One Should Avoid," and "You Just Can't Get Good Help Anymore." In his "Quotes from the Zombie Factbook," Clark reminds us:

"Everything you thought
you knew about zombies, is never
quite enough, when the future comes
pounding at your door."

Clark's verse uses crisp, clean lines upon which he serves up ample and imaginative helpings of gore and decay, various slices of unlife seen from different parts of the highway and cities afflicted by an infestation of zombies. At his best, his pieces are quite inviting before they sink their teeth into you. Thematically the collection holds up well, with almost all of the poems propelling his central propositions forward, but rarely lumbering like his titular antagonists. The zombies, despite their condition, often are glimpsed in a sympathetic light. But you should still watch out for the ones that bite.

This week I had a chance to ask a few questions to see what inspired G.O., and where he might go next. I was happy he took time out to respond:

How did you get started on all of this? What was one of the hardest things for you to learn?
Not much to tell. I'm retired, having worked for years in various libraries at the library assistant level. Live in Davis, CA surrounded by books, cds, etc. I started writing poetry back in college, but didn't start selling any until years later. As for the speculative poems I write now, (and for the last 20 or more years), I gravitated to them naturally. I like writing about the dark side on the one hand, and things science fictional on the other. As for the hardest thing I had to learn in regards to writing? To believe in my own abilities, and keep at it no matter the response from others. It's hard work, to say the least, especially now that I'm later years with less energy and brain cells.

What's your favorite zombie story or film?
I'm not sure I have any specific favorites. I like Joe McKinney's zombie novels; enjoy the more humorous zombie movies like Shawn of the Dead; and watch Walking Dead episodes on Netflix, which means I'm always behind. 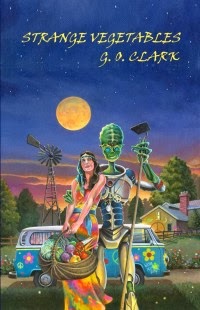 You've got many books under your belt, but for a first-time reader of yours, which book would you recommend as an ideal introduction to your style and technique?
I think Strange Vegetables, which came out in 2009 from Dark Regions Press. It was the sixth book I published, and represents my style and technique best. It is primarily science fiction related, with some dark elements. It's a good example of my strange sense of humor, which shows up in all my books to some extent, including the recent zombie poems collection.

Besides zombies, what's your next book about, to you?
I have a new horror poetry collection off to a publisher for his consideration. Not a themed collection, just dark poetry in general. It's probably closer content to my older collection, Shroud of Night. 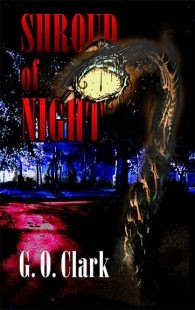 Do you feel California and its geography or its residents have had a particular impact on the way you approach poetry?
I don't think so. I mean, there's creepy places and strange people here just like everywhere. I've used the local cemetery and thinly disguised local folk in some of my poems and stories, but I would have done the same anywhere.

What's your advice for beginning writers who want to write poetry involving zombies?
I tend not to give advice to writers beginning or otherwise. Each writer is unique, and needs to find their own voice, and if part of that process includes writing poems about the undead, then so be it. Poetry has no bounds when it comes to subject matter.

What's a project you really hope to take on in the next few years?
A themed book of robot poems. I have about a dozen so far, mostly reprints. Also hope to get another book of short stories published, and have sent out the manuscript to a small press for their consideration.

Where else can we find you throughout the year?
I have poems coming up in Asimov's, Analog, and Dreams & Nightmares. I also have a flash fiction soon to be published in Daily SF. I need to get to work and send out some new submissions. Getting lazy in my old age.

Is there a classic poem you turn to for a touchstone when you need some dark inspiration?
No poem in particular, but the dark poetry of Bruce Boston inspires me at times. Individual poems by poets move me from time to time as well, none come to mind at this moment.

What's your favorite music to listen to as you write your books?
When I do listen to music while writing its classical or jazz. Instrumental only, as lyrics distract my thoughts.

We often talk about how an artist gets started, but what keeps you going?
In my case, momentum. I really didn't get serious about writing until my thirties, and then one acceptance led to another, and so on. I'll stop when I run out of ideas. I still read a lot, which keeps things percolating.

What's the strangest thing we might find near your writing space?
ME.


Be sure to visit G.O. Clark at his website: http://goclarkpoet.weebly.com and his newest book Scenes Along the Zombie Highway from Dark Regions Press!