S.P. Somtow came to my attention a little over a decade ago when I was first in Bangkok in 2002 looking for my long lost family. His opera Mae Naak was about to debut, although I did not get a chance to catch it. In many ways, that story left an indelible impression on me.

S.P. Somtow came to my attention again when he came to Minnesota for the fantasy convention Diversicon, which has alway been one of the biggest conventions to support my work as a writer and introduced me to many who are a part of my newest book DEMONSTRA. But I do have to admit I seem to have a habit of just missing him, including a recent trip to California.

In any event, last year we saw the release of his book Bible Stories for Secular Humanists which was described as: 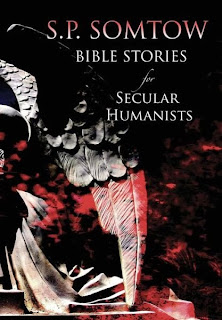 "Here are eight of World Fantasy Award winner S.P. Somtow's most controversial stories, including three previously uncollected ones. Each deals with a "sacred cow" of the Judaeo-Christian tradition and subjects it to the pitiless scrutiny of historian, mythographer, and fantasist. Violent, sometimes kinky, these stories nevertheless reach surprising epiphanies about faith and redemption. A curiously sympathetic Antichrist hunts down the next messiah with the aid of a unicorn. St Paul ponders about whether, in order to make his miraculous new religion work, he needs to get rid of an inconvenient Jesus. An entertainment mogul in ancient Rome figures out how to cut costs by staging resurrections in the arena. Lot's daughter has managed to survive as a vampire and pours out her heart in an incest survivors' support group.... These aren't the Bible stories you learned in Sunday school - yet they raise many of the questions you may not have dared ask there.Between them the eight stories in this book were nominated for ten awards, including Bram Stokers, International Horror Guild Awards,and an Asimov's Magazine Reader Poll."

His current biography reads as:


"Once referred to by the International Herald Tribune as “the most well-known expatriate Thai in the world,” Somtow Sucharitkul is no longer an expatriate, since he has returned to Thailand after five decades of wandering the world. He is best known as an award-winning novelist and a composer of operas.

Born in Bangkok, Somtow grew up in Europe and was educated at Eton and Cambridge. His first career was in music. His earliest novels were in the science fiction field but he soon began to cross into other genres. In his 1984 novel Vampire Junction, he injected a new literary inventiveness into the horror genre, in the words of Robert Bloch, author of Psycho, “skillfully combining the styles of Stephen King, William Burroughs, and the author of the Revelation to John.”

Vampire Junction was voted one of the forty all-time greatest horror books by the Horror Writers’ Association, joining established classics like Frankenstein and Dracula. In the 1990s Somtow became increasingly identified as a uniquely Asian writer with novels such as the semi-autobiographical Jasmine Nights. He won the World Fantasy Award, the highest accolade given in the world of fantastic literature, for his novella The Bird Catcher.

After becoming a Buddhist monk for a period in 2001, Somtow decided to refocus his attention on the country of his birth, founding Bangkok’s first international opera company and returning to music,. According to London’s Opera magazine, “in just five years, Somtow has made Bangkok into the operatic hub of Southeast Asia.” His operas on Thai themes, Madana, Mae Naak, and Ayodhya,have been well received by international critics. His most recent opera, The Silent Prince, was premiered in 2010 in Houston, and a fifth opera, Dan no Ura, will premiere in Thailand in the 2013 season. His sixth opera, Midsummer, will premiere in the UK in 2014.

He is increasingly in demand as a conductor specializing in opera and in the late-romantic composers like Mahler. His work has been especially lauded for its stylistic authenticity and its lyricism. The orchestra he founded in Bangkok, the Siam Philharmonic, is mounting the first complete Mahler cycle in the region. He is the first recipient of Thailand’s “Distinguished Silpathorn” award, given for an artist who has made and continues to make a major impact on the region’s culture, from Thailand’s Ministry of Culture."

I think he's using an interesting approach with his latest book. He's taken on a wide range of topics from vampires to werewolves, Thai ghosts, and more that I think it's hard for us to talk about modern Thai speculative literature without discussing him. You can visit his music website at: http://somtowmusic.com