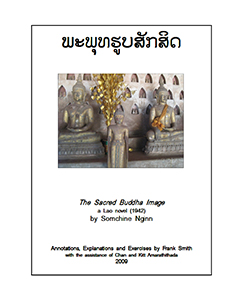 Phaphutthahuup Saksit, The Sacred Buddha Image was the first modern Lao novel, published in 1944 by Pierre Somchine Nginn (1892-1971). The plot of the novel involves a Lao-French detective searching for a missing Buddha image. It's interesting that our community first opted to try writing a mystery novel.

For historical context, this was composed during World War 2, particularly the tumultuous period following the fall of France to the Germans in 1940 and Laos came under the rule of the French Vichy government, which was under Japanese supervision. In 1944, the Lao-Seri movement was forming with a "Laos for Laotians" policy that would seek independence from the French.

Nginn is remembered as noted composer of French verse. He was born in Luang Prabang, the son of François Nginn, who had participated in the 1892 Pavie mission. The French edition of Wikipedia notes that after studying in Saigon and Paris, he began a career in 1909 in Primary Education. Subsequently he took on increasingly important duties.. In 1949 he became Director of the National Service of Information, Propaganda and the Press in Laos. He also published a volume of poetry in French: Dok Champa (ດອກ ຈໍາ ປາ) (1961).

The writers at StudyLao.Com concede that the novel might seem simplistic or naive to modern readers, but it was a significant work as one of the first texts to attempt Lao prose, rather than verse. They also feel that "due to its brevity and direct, simple prose, Phaphutthahuup Saksit is ideal for the intermediate student of Lao as a first foray into more complex texts beyond folk tales and news articles."

What will the future holds for Lao mysteries, considering this novel as well as the body of work Collin Cotterill has created with his Dr. Siri novels. These involved a Lao coroner set in the years shortly after the end of the Laotian Civil War.