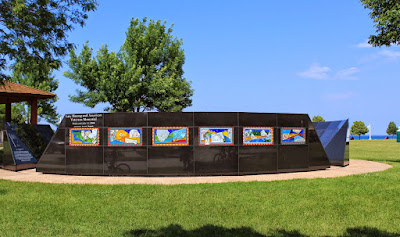 In 2006, the city of Sheboygan, Wisconsin unveiled a veterans memorial to honor Lao, Hmong and American veterans who were among the thousands of Special Guerrilla Unit soldiers who died fighting the communists in Laos during the Vietnam War.  This year marks the 10th anniversary for the memorial, which was defaced in 2008. You can visit the official website for the memorial here: http://www.laohmongusmemorial.com.

During the 1960s and 70s, Laos was a neutral country and the US State Department and the CIA coordinated a secret 30,000 man army in the highlands of Laos to secretly assist the monarchy and to protect US and allied forces in South Vietnam from communist forces using the illegal Ho Chi Minh Trail in Laos.

Set in Deland Park, the 44 foot-diameter memorial cost an initial $140,000. The granite panels of the memorial are engraved with the names of hundreds who died during the conflict, with additional names being added as they become known and confirmed. The memorial was funded through private donations. Other Secret War memorials are located at Arlington National Cemetery in Virginia, Hurlburt Field, Fla. and Fresno, Calif. There are about 4,000 Hmong in Sheboygan.