Recently at the Norton Simon Museum, they held the exhibition Dark Visions: Mid-Century Macabre in Pasadena, California. Unfortunately I missed this one but one can get a bit of sense of the items exhibited through the five-minute introductory video at Vimeo.

The significant premise of the exhibition was that "Lurking on the fringes of the 20th-century art world was something sinister, something not necessarily identifiable or easy to fit into a specific movement such as Abstract Expressionism, Pop Art or Minimalism. The exhibition Dark Visions: Mid-Century Macabre looks to mine the dark recesses of the mid-20th century and explore the creations made to exorcise the demons that plagued artists."

The exhibit was composed of assemblage, painting and lithography, with works by Edward Kienholz, Joseph Cornell, Clare Falkenstein and Jess, among others.

The Norton Simon Museum's earliest example was a closed box by Kurt Schwitters, entitled  Lust Murder Box No. 2 from 1920–22, which they felt foresaw the fascination with the macabre among artists in later decades. The title for the piece was based on a damaged plaster figure that once lay in the box and daubed with lipstick to make it look “bloody.” 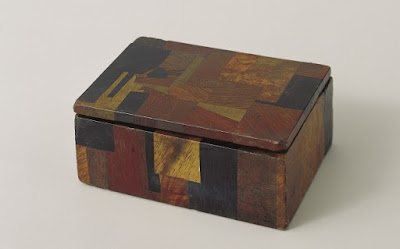 The question we might ask then is how have our techniques changed in the way we depict the human struggle to engage with morbid subjects such as death and evil in its various, often horrifying forms.