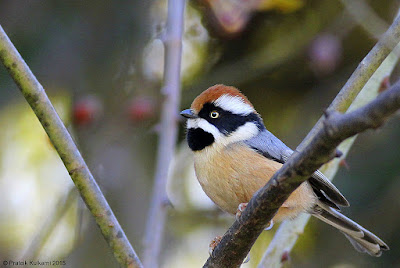 As a Lao poet, there's often an expectation for you to build an expertise in a wide range of topics such as the food, flora and fauna, and the geography of your country.

For example, over the years I've discussed things such as the Saola and the Laotian rock rat, as well as various Lao fish, the Laotian wolf snake, and prehistoric creatures we've discovered such as the Ichthyovenator, a type of spinosaurus. Laos is home to a wide variety of birds although many of them haven't been classified fully by Western science standards. There's a whole discussion to be held about that.

So, to be of some assistance to those who are seeking big Lao tits on Google or Bing or whichever search engine of choice you use, I'm discussing Aegithalos concinnus, the Black-throated tit, who is a member of the long-tailed tits. Thankfully, these are common enough they are nowhere close to extinction or considered a particularly threatened species.

As you can guess, long-tailed tits have medium to long tails. They make woven bag nests in trees. They have a mixed diet, including insects and spiders, seeds, fruits, and especially raspberries.

There are 9 species of long-tailed tits worldwide and at least 1 species known in Laos, which is the Black-throated tit, also known as the the Black-throated bushtit. It can be distinguished by a black throat and a black 'bandit mask' around the eye. They have three toes pointing forward and one toe pointing backwards and are considered perching birds.

Their nests are typically constructed from moss and lichen in tree branches. Like other tits, Black-throated tits in Laos are highly social, and can flock in groups up to 40 at a time. The Black-throated tits can be found in the Himalays, India, Nepal, Bhutan, Burma, Vietnam, and Taiwan, preferring broadleaf forests and pine forests at middle altitudes.

How big can a Lao tit get? Typically, the Black-throated tit is considered small at approximately 10.5 cm long and only 4-9 grams in weight.

I do not immediately recall any poems about Lao Black-throated tits among my fellow Lao poets. So, I certainly encourage emerging Lao writers to pen a line or two about these fine birds to build a greater interest in the tits of Laos and other natural beauties that are part of our collective heritage.